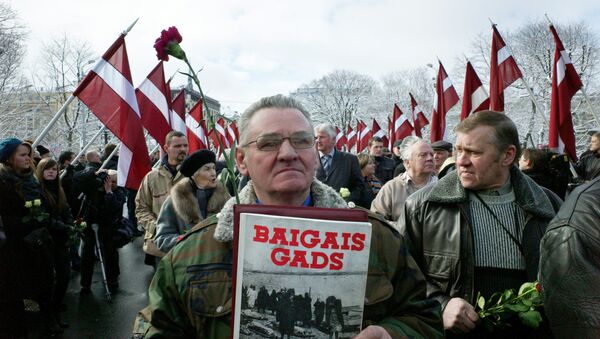 "This is an extremely dangerous development that now 70 years later we are seeing neo-Nazi organizations coming to the forefront… and being tolerated and condoned in the Baltics, and especially now in Ukraine, where we see openly Nazi, neo-Nazi organizations, ideas, symbols," Illinois University Professor Francis Boyle said Friday.

Since 1998, Waffen-SS Latvian Legion veterans and those who support them have been taking part in annual parade on May 16 in Riga.

Independent Foreign Policy Analyst Mark Hackard told Sputnik that people that encourage such ideologies will ultimately have to carry responsibility for their actions.

"It is an unfortunate phenomenon and it is indeed happening," Hackard added.

The analyst argued that Neo-Nazism is currently on the rise because of "the billions invested by governmental and private interests in the West."

World War II lasted from 1939 to 1945 and engulfed over 80 countries and regions. Up to 70 million people are believed to have died in the conflict. The Soviet Union lost about 27 million people, according to historical estimates.