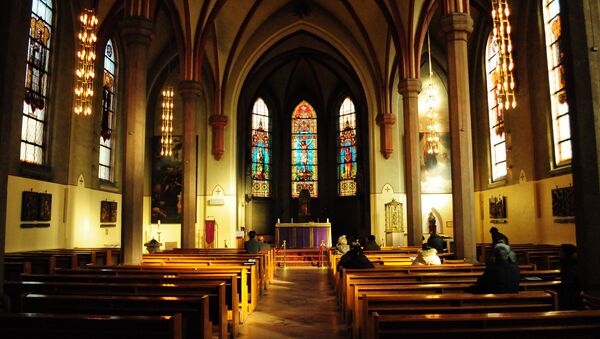 Norway's longstanding blasphemy law has been officially repealed as a response to the Charlie Hebdo attack in Paris, carried out by religious extremists in January 2015.

Charlie Hebdo's Aftershocks: Shooting at Muhammad Cartoon Contest in Texas
Norway has officially repealed its longstanding blasphemy legislation this week in a symbolic gesture aimed at supporting the freedom of speech in the country.

According to section 142 of the Norwegian Penal Code, those who broke the law could face fines or six months in prison.

In February 2015, after the infamous Charlie Hebdo massacre in France, Conservative MP Anders B. Werp and Progress Party MP Jan Arild Ellingsen proposed to scrap the law, claiming that it "underpins a perception that religious expressions and symbols are entitled to a special protection" and insisting that  "it is time to stands up for freedom of speech, even in religious matters."

Things I didn't know: till today, blasphemy was illegal in Norway. Now you can blaspheme all you want. Didn't say which religion, of course.

However, the initiative to repeal the blasphemy law met with harsh criticism from Norwegian Christian publicists, who even went so far as to say that Norway has committed "cultural suicide."

"It is a symbol of the cultural suicide," Norwegian publicist Finn Jarle Sæle wrote, "Today we have no value basis. Although the Constitution states that Christianity and humanism constitute the foundation of the state, its sense has been lost."

Norway's parliament first voted for the repeal of the law in 2009, despite strong opposition from the Christian Democratic party. However, the move has been repeatedly delayed due to the country's bureaucratic procedures.

Letting God Sort Them Out: Swedish Doctor Refuses to Treat Christians
Remarkably, the last time a person was charged with blasphemy was in 1933: Norwegian writer Arnulf Øverland was tried for delivering a lecture entitled "Christianity, the tenth plague" to the Students' Society. However, the writer was acquitted. Twenty years earlier, in 1912, Norwegian journalist Arnfred Olsen was convicted for his harsh criticism of Christianity in the country's radical magazine Freethinkers.
Newsfeed
0
Access to the chat has been blocked for violating the rules . You will be able to participate again through:∞. If you do not agree with the blocking, please use the feedback form
The discussion is closed. You can participate in the discussion within 24 hours after the publication of the article.
To participate in the discussion
log in or register
loader
Chats
Заголовок открываемого материала