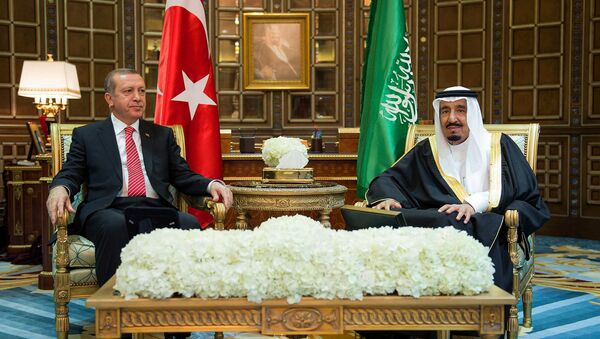 Andrew Korybko
All materials
Regional rivals Saudi Arabia and Turkey have temporarily put aside their differences in order to support a new anti-Assad coalition in Syria.

The so-called "Army of Conquest" has been ravaging northern Syria in the past couple of weeks with a ferocity unseen since the global rise of ISIL last year. The difference between then and now, however, is that the sponsors of Syria's newest terrorist army openly flout the support they provide to their spawn, and the newfound convergence of militant interest between Saudi Arabia and Turkey signifies a brutally new stage in the War on Syria that's giving birth to an un-Islamic State clone. This deadly collaboration proves that the two have temporarily put aside their ideological differences and agreed to sort it out in the aftermath of their unified regime change operation. Furthermore, it highlights that Saudi Arabia is front-and-center in destabilizing the Mideast, and that even Riyadh's rivals have no choice but to eventually end up collaborating with it in order to pursue what they identify as shared military interests.

The latest actor of chaos to emerge on the Syrian battlefield is the Army of Conquest, which is basically a smorgasbord of all manner of anti-government groups. It's comprised of the Muslim Brotherhood, Ahrar al-Sham, al-Nusra, fragments of the so-called "Free Syrian Army" (more accurately called the Fake Syrian Army), and many others. The only reason that these differing terrorist groups cooperate and don't behead another is because their external patrons are now on the same page in pursuing regime change first and settling intra-jihadist scores second. Specifically, it's being widely reported that Turkish President Erdogan and new Saudi King Salman agreed to a de-facto alliance over Syria when the former visited the new regent last March, meaning that pro-Muslim Brotherhood groups led by Turkey are fighting alongside Wahhabist ones led by the Saudis, or put another way, that mortal Mideast enemies are now wartime comrades.

Although such an alliance may come as a shock to some, it was bound to happen eventually. The myriad proxy groups fighting in Syria thought they could achieve victory without allying with their rivals, but this proved to be impossible as the Syrian Arab Army meticulously picked them apart one-by-one. The pattern began to change over a year ago when ISIL started consolidating as a serious military force and rose to global notoriety, eventually incorporating and forcefully absorbing smaller terrorist groups. Their resultant military success scared the remaining terrorists groups in Syria into realizing that they could not survive indefinitely on their own in the face of both an aggressively expanding ISIL and the experienced Syrian Arab Army, hence the impetus to begin considering previously unthought-of alliances between rival Islamist factions. Nothing could come out of these considerations, however, so long as ISIL was the regime change darling of the West and the Gulf States, and especially while Qatar and Saudi Arabia were in the depths of their Muslim Brotherhood-Wahhabist Cold War.

When ISIL fell out of favor with the West and the Gulf States and was no longer the fully controllable vanguard of regime change that it once was, that's when the US suggested that the Saudis and Turks, its regional Lead From Behind partners and official "Syrian rebel" trainers, sit down and reach an agreement in order to create the un-"Islamic State" 2.0, now called the Army of Conquest. Just like ISIL, it would receive state support in its planned meteoric rise as it brings together a hodge-podge of anti-government and terrorist misfits, and as with its precursor and other terrorist forefathers (notably the Libyan Islamic Fighting Group, the Taliban, and Al Qaeda), it too will likely spiral out of its creators' control and rapidly go rogue. In any case, the Army of Conquest/un-Islamic State 2.0 couldn't have been created had it not been for the resolution of the Qatari-Saudi Cold War and Doha's bequeathing of Muslim Brotherhood leadership to Ankara.

Erdogan's "Justice and Development" party has always had a close affiliation to the Muslim Brotherhood, but by the time the Turkish leader rose to power, Qatar had already claimed patronage over the movement. The Muslim Brotherhood is violently opposed to whatever it identifies as being a dictatorship, be it former Egyptian President Mubarak's secular government or the autocratic Wahhabist Kingdom of Saudi Arabia, and it doesn't shy away from using terrorism to promote its view of revolution. Qatar had taken the group under its wing due to the strong ideological affiliation its late leader shared with the movement, which continued after his son and successor rose to the throne in 2013. The Saudis had always been uneasy about this relationship but became alarmed after the Muslim Brotherhood rose to power in Egypt following Mubarak's overthrow. Then, the group began competing with and sometimes even fighting against the Saudis' own militant proxies inside Syria, which essentially began the Cold War between the two Gulf Kingdoms.

US Defense Department Begins Training of Syrian Rebels
In early 2014, Saudi Arabia and its GCC subordinates Kuwait, Bahrain, and the UAE withdrew their ambassadors from Qatar in a sign that the bloc (of which Doha is also a part) wanted to take action to chastise their prodigal member and defend themselves against the possibility that the Brotherhood could move into their own backyard next. The diplomatic spate was prolonged for nearly a year until Qatari Emir Thani and then-Saudi King Abdullah met last November in a shadowy meeting that in hindsight signaled Doha's defeat. The Muslim Brotherhood had earlier been asked to quit Qatar in September, but the royal meeting two months later officially signaled the end of their stay in the Gulf, and unsurprisingly, its leadership ended up in Turkey, which currently supports it unconditionally.

A Dog In Every Fight

Saudi Arabia has positioned itself as the node for regional destabilization initiatives, and its close cooperation with three disparate partners (each of which is also diverse amongst themselves) attests to this fact. Here's the overview of Riyadh's unlikely allies and who they're partnered up against:

Saudi Arabia used its billions of dollars of influence over al-Sisi in order to swing the secular leader over to the Arab NATO's War on Yemen, which is all the more unusual when one considers that the anti-extremist Egyptian President is now taking orders from the country that's the ideological center of the same movements he's publicly against.

The War on Syria and the quest to create the un-Islamic State 2.0 has brought together the Muslim Brotherhood and Wahhabis under the mish-mash umbrella of the Army of Conquest.

The only other country that could possibly bring together Israel, Egypt, and Turkey in various Mideast hot and cold wars is the US, making it seem as though Saudi Arabia endeavors to be a ‘mini-America' in the area. However, Riyadh should always remember that the anti-American backlash that's now the regional zeitgeist could just as quickly become anti-Saudism as a consequence of the country's aggressive actions and many military missteps, since ‘being American' also brings with it the same stigmas associated with the unilateral quest for power.