Brussels or Brexit: What the UK Election Means for Britain in Europe 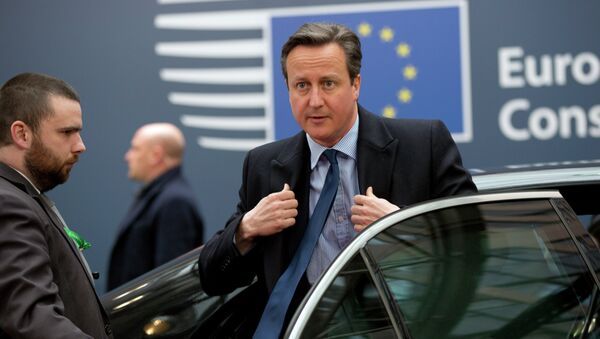 © AP Photo
Subscribe
With David Cameron's Conservative party on course to win a stunning majority in the UK general election, many have asked what this will mean for Britain's relationship with the EU, as the prime minister plays a delicate balancing act to appease both Brussels and his own party's Eurosceptic elements.

Not immune from going head to head with Brussels on European matters, a large part of Cameron's campaign was based on his pledge to give the British public a vote for an in-out referendum to stay in a reformed European Union by 2017.

#Conservative have secured 323 seats — enough for a working majority #GE2015 All eyes turn to #Brexit pic.twitter.com/XvOBJYxDTD

While the prime minister himself has publicly said that he would prefer to stay in a reformed EU, the call for a referendum on European membership has been triggered by the longstanding Euroscepticism among significant elements Cameron's Conservative party, who believe Britain would be better placed opting out of the bloc.

Why would you want to leave all this beauty? #GE2015 #Brexit pic.twitter.com/c0Z7xz5yJ3

The issue of Britain's place in Europe has been a matter of heated debate for the Tories, with previous Conservative governments unable to reach a compromise between pro-EU and Eurosceptic elements of the party.

In order to keep the support of these anti-Brussels elements, Cameron has had to make concessions over Europe, and put on a tough face when tackling issues with Brussels.

Now that it's clear there'll be an EU referendum, pro-EU business community will speak up and the debate on #Brexit will be more balanced

And while the Conservatives appear to be on course to win a slim majority, Prime Minister Cameron will be placed under pressure by many of his own anti-EU backbenchers, keen to influence the government's policy on Europe.

There is a fear among some Tory supporters that the promised referendum will expose the deep divisions within the party, and potentially lead to an internal rebellion — which could have sizeable impacts given the Conservatives are expected to secure only a very slim majority in parliament.

The prominence of Euroscepticism in the Conservative party, and more generally in Britain, combined with the opposing views to remain a key member of the bloc has left Cameron stuck in the middle as he tries to play the delicate game of balancing the concerns of both sides of the debate.

As 2017 approaches, analysts have pointed out how the prime minister faces the unenviable task of trying to renegotiate at least some terms of Britain's relationship with the EU, and subsequently putting forward the argument that the UK should stay in the union.

With many suggesting London will find it difficult to secure significant EU reforms, some analysts predict that Cameron, German Chancellor Angela Merkel and other EU powerbrokers will have to knock their heads together in a back room and devise a plan to at least convince the British public that they are getting a good deal on European membership.

Dear #Germany, if you think negotiating with #Greece has been tricky, I'm afraid it may have been but a mere warm up for #UK! #Brexit #EU

However any such plan may not go down well with other EU members, who in the past have been irked by Britain's assertion that it should have a separate, special deal in Europe.

Additionally, Cameron's approach at trying to appease the internal and external pressures has been heavily criticized by many business and political figures in both Britain and Europe, who say that the British leadership is playing a very risky game by gambling on the UK's EU status.

As the final votes for the 2015 election are counted and the last seats decided, Britain's leadership will continue to try and appease the concerns of its Eurosceptic elements, while at the same time avoiding a Brexit from the EU.

Many say offering a referendum and calling for reform is a dangerous, risky game that needs to be balanced very carefully, with potentially unpredictable outcomes ahead.