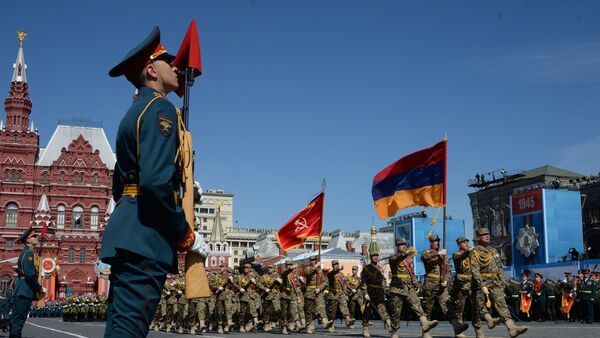 © Sputnik / Host Photo Agency
/
Go to the photo bank
Subscribe
An Armenian pensioner is about to complete an epic walk from Yerevan to Moscow, devoted to 70th Anniversary of Victory over Nazism in the Great Patriotic War.

A Sneak Peek of Moscow's Massive May 9 Victory Parade
Grigory Tepoyan, a 76-years old Armenian pensioner is completing an epic walk devoted to the 70th Anniversary of Victory in the Great Patriotic War from Armenia to Russia's capital.

The pensioner has decided to travel the same route that his father had gone during the Second World War.

On the outskirts of Moscow almost three dozen cars with the Armenian diaspora representatives greeted the doughty traveller. The pensioner has walked 2,200 kilometers in 46 days.

Russian Defense Ministry Declassifies Information on Foreign Units in WWII
"On May 9, after the Victory Parade, I will lay flowers at the Tomb of the Unknown Soldier. I consider all these people my family. It does not matter to me whether they were Russians or Armenians," he said.

Grigory Tepoyan started planning his tour about a year ago, preparing his body through intensive physical exercises before undertaking his bold campaign. Eventually, on March 22 he quietly left his house at night.

During his trip, the 76-year old has faced many difficulties. At times he had to spend his nights at border outposts, police stations and even in the houses of Azerbaijani nationals. He noted, however, that the Azerbaijani people had demonstrated a genuine hospitality.

Putin: ‘Cynical Attempts to Whitewash Nazism, Militarism Unacceptable’
People were sharing wartime memories with the elderly traveller, telling stories of their ancestors, who fought against Nazis during the Second World War.

Grigory Tepoyan's father, junior lieutenant Hunan Tepoyan, left the village of Alastan at the beginning of the war. Junior lieutenant Tepoyan never returned home – he was killed near Dnepropetrovsk in December 1943 at the age of 30.

Grigory Tepoyan is planning to visit Dnepropetrovsk in September 2015 to commemorate his father's struggle against the Nazi invaders.

The robust 76-year old traveller had to walk about 50 kilometers a day to complete his tour on time.