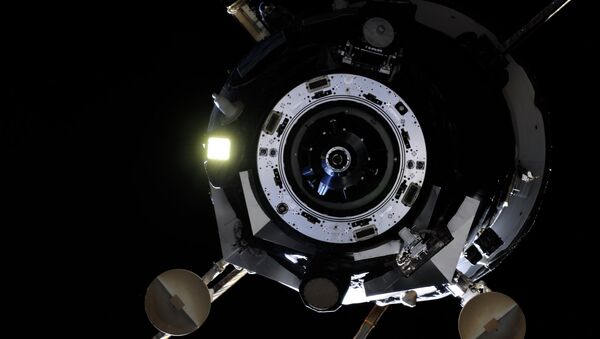 © Photo : Roscosmos
Subscribe
The time window for the failed Progress spacecraft reentry in the Earth's atmosphere was changed to a span between 01.13 a.m. and 04.51 a.m. Moscow time on May 8, according to Russia’s space agency Roscosmos.

Russian Failed Progress Spacecraft to Perish May 8
MOSCOW (Sputnik) — Russia’s space agency Roscosmos on Thursday updated the time window for the failed Progress spacecraft reentry in the Earth's atmosphere to a span between 01.13 a.m. and 04.51 a.m. Moscow time on May 8.

Meanwhile, a source in the Russian space industry told RIA Novosti that the space freighter would most likely make the reentry over the Indian Ocean, and its debris could fall north of Madagascar.

The spacecraft stopped transmitting telemetry shortly after separating from the carrier rocket and began to spin.

Roscosmos announced the following day the loss of the Progress. Russia's Energia space corporation stressed that the incident does not endanger the ISS or the work of its crew.

According to Roscosmos head Igor Komarov, a special commission has been set up to investigate the cargo vessel's failure. The investigators are expected to report their findings before the launch of a piloted mission to the ISS on May 26.