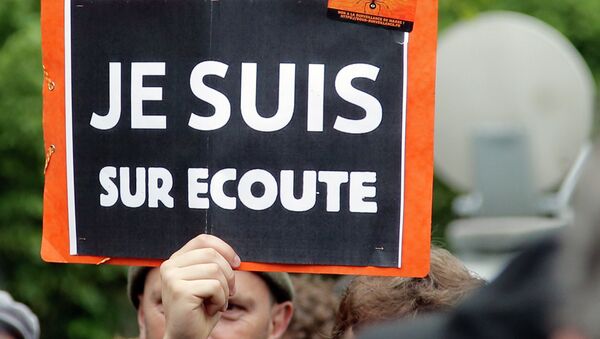 A new French surveillance bill has sparked a lot of controversy, prompting some experts to draw parallels between the new legislation and America's "USA Patriot Act."

The new anti-terror legislation "Projet de Loi sur Renseignement" received high praise from French parliamentarians on Tuesday, but at the same time prompted claims that the bill would deal a heavy blow to France's fundamental principle of liberté.

The new legislation, which passed by 438 votes to 86, will allow state authorities to track people's online and mobile communications to determine if they are related to "terrorist" inquiries, place cameras and recording devices in private dwellings and obligate Internet service providers to share data with surveillance agencies upon request.

Furthermore, intelligence services will be authorized to install "keylogger" devices, able to record every key stroke of a targeted personal computer in real time.

US Federal Court Rules NSA Surveillance Illegal
In accordance with the new law, authorities can collect, store and analyze digital metadata for suspicious behavior and spy upon any suspect without prior judicial approval.

Curiously enough, according to the survey conducted in April, 2015 the controversial bill has won widespread approval in France: 63 percent of respondents said they were in favor of limiting personal freedom on the Internet, including tracking of metadata by intelligence services, while only 32 percent expressed their disapproval of the legislation.

The legislation proposed in the wake of the hideous Charlie Hebdo massacre looks strikingly similar to the USA Patriot Act adopted after the September 11, 2001 terror attacks, some experts insisted.

"Highly regarded as the French equivalent of the USA Patriot Act, enacted in a post 9-11 context where vengeance trumped civil liberties, France finds itself in an oddly Bush-esque environment: an unfavorable president, a country with a wounded ego and increasing unemployment – all of which has led many to get behind a law that, in any other environment, would get suppressed by France’s liberté, egalité, fraternité mentality," French publicist Liam Boogar pointed out.

While some experts are expressing their deep concerns regarding the new legislation, saying the bill result in surveillance practices similar to those exposed by Edward Snowden, others disagree.

"I think it's incorrect to say France is turning into the US, the Patriot Act contains many measures that didn't require the prior approval from any authorities except the FBI," Jean-Charles Brisard, the chairman at the Paris-based Center for the Analysis of Terrorism, told The Local, adding that in France all proposed surveillance measures will be observed by the national commission for checking intelligence techniques (CNCTR).

World
Canada Set to Pass Ominous ‘Anti-Terror’ Law, Despite Widespread Protests
According to the expert, broad metadata collection in France will not lead to "a global surveillance of citizens."

Furthermore, "most of the surveillance methods were already used in France — they were simply illegal," Jean-Charles Brisard elaborated. Since terrorists are adopting new and sophisticated technological methods, intelligence services should counterbalance them more effectively, he added.

However, the surveillance legislation has yet to receive official approval from the French Senate before it officially becomes law.

France voted on #PJLRenseignement. Canada parliament about to vote on #C51. After these laws are in force, you can feel very insecure

It should be noted that France is not the only state that has recently made a step towards limiting the individual freedoms of its civilians. On Thursday, Canadian lawmakers passed an "anti-terror" bill, C-51, which allows surveillance agencies to gain access to citizens' private information, including financial status, medical history, and religious and political beliefs.

#PJLRenseignement and #C51 passed both in parliament in one week. Silly world.

The law was introduced in response to two lone-wolf terror attacks in Ottawa in October 2014, and has already been blasted by its opponents as an attempt to turn the country into a police state.

The question remains open if the Western governments are using the terror threat as a pretext for limiting the fundamental freedoms of their civilians.