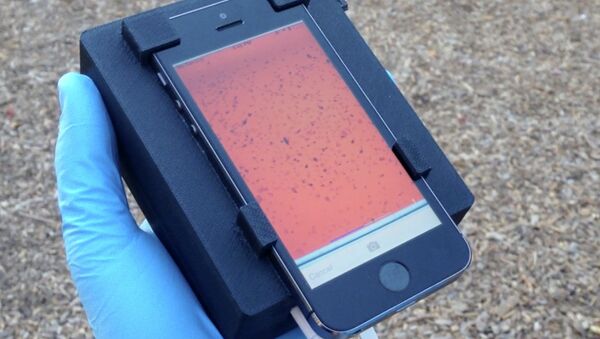 Researchers led by a team at the University of California, Berkeley, have developed the CellScope, a smartphone microscope capable of detecting parasites in a drop of blood.

Canadian Scientists Claim Successful Ebola Vaccine Trial
A mobile phone microscope capable of detecting and quantifying parasites in a drop of blood has been developed by a group of scientists led by a team at the University of California, Berkeley, media reports said.

"We previously showed that mobile phones can be used for microscopy, but this is the first device that combines the imaging technology with hardware and software automation to create a complete diagnostic solution," according to Daniel Fletcher of UC Berkeley.

He explained that "with one touch of the screen, the device moves the sample, captures video and automatically analyses the images."

The CellScope system includes a modified smartphone with a 3D-printed plastic base for the blood sample, LED lights, microcontrollers, gears, circuitry and a USB port.

Using motion instead of molecular markers or fluorescent stains, the CellScope's software predicts the number of Loa loa parasites in the blood and informs medics whether they are suitable for drug treatment.

Loa loa is the filarial nematode species that causes Loa loa filariasis, commonly known as "eye worm." It is fraught with elephantiasis, which is believed to be the second-leading cause of disability worldwide.

The hope is that similar smartphone microscopes could be adapted to test for other deadly infections such as malaria, tuberculosis, and soil-transmitted parasitic worms or helminthes.