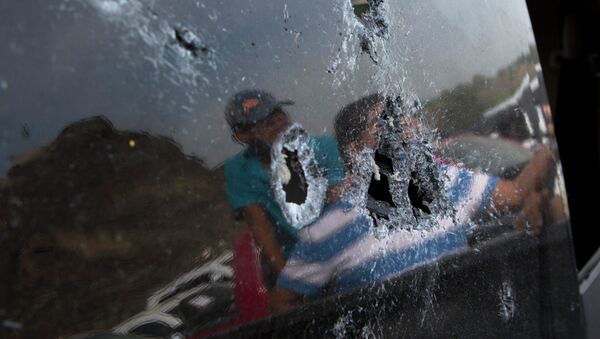 The Internal Displacement Monitoring Center report shows that violence in Mexico has led to the internal displacement of over 281,000 people.

MEXICO CITY (Sputnik) — Violence in Mexico has led to the internal displacement of over 281,000 people, according to a report published by The Internal Displacement Monitoring Center (IDMC) on Thursday.

"Mexico had at least 281,400 IDPs [internally displaced persons]… many of them displaced by organized crime and gang violence," the report stated.

According to IDMC, part of the Norwegian Refugee Council non-governmental organization, the latest findings accounting for 2014 constitute a 12-percent spike compared to the previous year.

"Drug traffickers and other criminal groups in Mexico were responsible for thousands of civilian deaths and kidnappings, the terrorizing of local populations, extortion rackets, threats and the corruption and intimidation of government officials, all of which led to displacement," the IDMC report explained.

"Twenty-two alleged criminals were shot dead in Tlatlaya in the state of Mexico in June, 43 trainee teachers were killed or disappeared in Guerrero state in September, and at least 1,000 bodies were discovered in mass graves in Mexico," the report added.

Elsewhere in Central America, the IDMC report uncovered a staggering six million of internally displaced persons in Colombia, followed by almost 289,000 in El Salvador, nearly 249,000 in Guatemala and at least 150,000 in Peru.