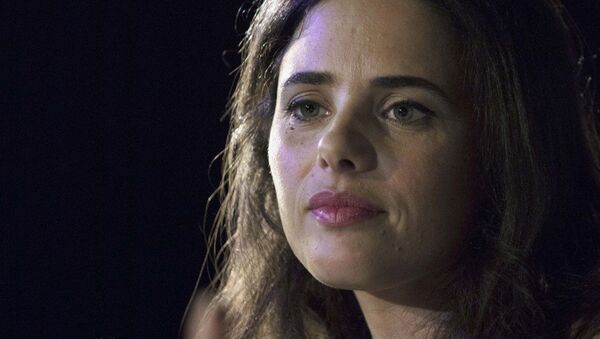 © AP Photo
Subscribe
There are fresh concerns over the future of Israeli-Palestinian relations after an Israeli ultranationalist member of the country’s parliament, who is accused of calling for the genocide of Palestinian people, was appointed Israel’s Justice minister.

Ayelet Shaked from the far-right HaBayit HaYehudi (Jewish Home) party was given the position as justice minister as part of a deal that saw PM Netanyahu gather enough support to form a coalition and control the Israeli parliament, the Knesset.

The decision has already stirred controversy within Israel, particularly the political Left, with Labour member of the Knesset (MK) Nachman Shai condemning the move.

"The demand to give Ayelet Shaked the Justice portfolio is like giving the Fire and Rescue Services to a pyromaniac."

Other political figures and pro-Palestinians activist groups have also criticized the move, which many have suggested will have a significantly negative impact on the already tense and strained relationship between Israel and the Palestinian people.

'This Is a War Between Two People'

Known for her outspoken and ultra-nationalistic views, Shaked attracted global attention and criticism in July 2014, when she posted a Facebook status denouncing Palestinians, during Israel’s 50-day military offensive in Gaza.

So it is really true: Ayelet Shaked will be the next Minister of Justice in #Israel. This may be more disastrous than Liberman being the FM.

"The Palestinian people [have] declared war on us, and we must respond with war. Not an operation, not a slow-moving one, not low-intensity, not controlled escalation, no destruction of terror infrastructure, no targeted killings."

The post, which was later deleted by Shaked and which was posted one day before a Palestinian teenager was kidnapped and burnt alive by Israeli extremists, was interpreted by many as calling for the genocide of Palestinian people, and inciting hatred between racial groups.

'Their Blood Shall Be on Their Heads'

In another Facebook post Shaked also claimed that there was no difference between those people involved in Palestinian terror organizations, and those within the general population, calling Palestinian children "snakes".

Ayelet Shaked, Supreme Court's no.1 enemy, as Justice Minister is creepy. But on the bright side, with a 61MK majority, nothing will happen.

"Behind every terrorist stand dozens of men and women, without whom he could not engage in terrorism. Actors in the war are those who incite in mosques, who write the murderous curricula for schools, who give shelter, who provide vehicles, and all those who honor and give them their moral support.

"They are all enemy combatants, and their blood shall be on all their heads. Now this also includes the mothers of the martyrs, who send them to hell with flowers and kisses. They should follow their sons, nothing would be more just. They should go, as should the physical homes in which they raised the snakes. Otherwise, more little snakes will be raised there."

"If these words had been said by a Palestinian, the whole world would have denounced it," he said.