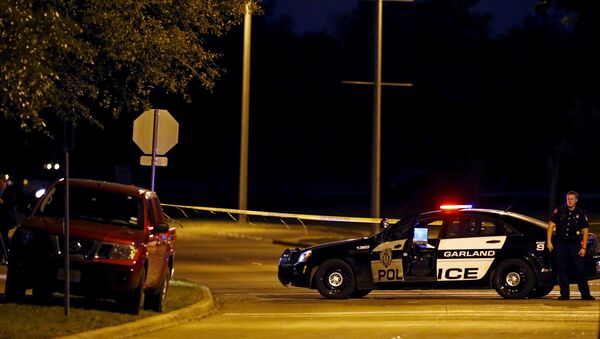 Experts claim that ISIL inspired but did not provide operational support to two lone-wolf gunmen who attacked a Muhammad cartoon contest exhibit in Texas on Sunday.

"The fact the Islamic State claims credit for the attack doesn't mean it actually played a role in the attack. In this case, the Islamic State seems to have been more inspirational than operational in terms of its assistance," Northeastern University Political Science Professor Max Abrahms told Sputnik.

Earlier on Tuesday, the militant group claimed that Sunday's attack on the cartoon contest in Garland, Texas was carried out by its fighters in protest of what it described as slander against the Prophet Muhammad.

Despite their declared allegiance to ISIL, Abrahms argued, shooting suspects Elton Simpson and Nadir Soofi apparently never trained nor received any direct guidance from the group.

"The attackers should actually be better understood as lone wolves because they were operating independently of any organization," Abrahms explained.

US Unsure if ISIL Behind Attack on Texas Muhammad Cartoon Contest
Steven Corman, Professor of Strategic Communication at Arizona State University, told Sputnik that Simpson's track record bears the hallmark of a lone wolf searching for a cause. Although Simpson may have contacted ISIL operatives via Twitter, Corman noted, he also wanted to join al-Shabaab, which is completely unaffiliated with the Islamic State.

"If I were placing a bet, it would be that Simpson was self-radicalized and trying to get in on some action however he could, and ISIL is being opportunistic by claiming responsibility," Corman said.

Regardless of the role ISIL played, Corman added, "micro-terrorism" events like the Texas shooting leave a significant psychological impact on the population while serving the extremists' goal of terrorizing their enemies.

Professor of Comparative Politics at the University of Albany Victor Asal told Sputnik that the evidence seems to indicate ISIL provided the inspiration for the attack but not the foot soldiers.

"My hunch, and it is just a hunch given the little we know at this point, is that the two people were inspired by ISIL, but that ISIL had no actual role in the initiation, targeting or carrying out of the attack," Asal said.

On Sunday, two men fired at an unarmed security guard outside the Curtis Culwell Center in Garland, Texas, which was hosting a contest for cartoon drawings of the Prophet Muhammad. Local police arrived at the scene and shot both suspects dead. The security guard sustained a leg injury and was taken to the hospital.

The Muhammad Art Contest was organized by the American Freedom Defense Initiative. The event, which hosted 200 people, offered a $10,000 prize for the best cartoon of the Prophet Muhammad and was held in response to January protests at a pro-Islam event hosted by the Curtis Culwell Center.