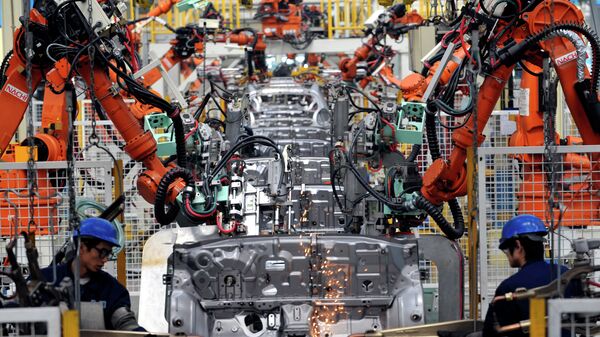 As part of a major push towards automation, the first robots-only factory is being built in China's Dongguan manufacturing hub, reducing human employees to a bare minimum.

The factory, owned by Shenzhen Evenwin Precision Technology Co., hopes to reduce its workforce by 90%, to only 200 human workers, with the introduction of a 1,000-robot workforce to take the human's places, according to the company's chairman, Chen Xingqi, state-run Xinhua news agency reported.

The automated workforce is just part of a major push to replace workers in Guangdong province's Pearl River Delta area, where major manufacturing operations are suffering from a shortage of labor.

The province has plans to spend 943 billion yuan ($154 billion) in the region to replace workers with robots over the next three years, the South China Daily reported. In Dongguan alone, 505 factories have invested 4.2 billion yuan in robot workers since September, with an eye to replace 30,000 workers, according to the city's Economy and Information Technology Bureau.

The push to automate is being subsidized by city governments who are handing out between 200 to 500 million yuan to both robot makers and to manufacturers who swap out human workers.

Guangzhou, the provincial capital, has set a goal of automating 80% of its manufacturing production by 2020.

The push for automated labor is being driven both by worker shortages, and by the rising price of labor. Not only are rising young middle-class Chinese increasingly rejecting factory jobs, but the working aged population (between 16-59) is shrinking, without any young immigrant population to replenish it.

Province-wide, Guangdong's manufacturing industry currently finds itself about 600,00 to 800,000 workers short, according to the region's Department of Human Resources and Social Security.

"Workers quit every day," a mid-level manager at an electronics plant told ChinaFile. "Physically challenging jobs under harsh conditions or jobs requiring repetitive processes are much less attractive to young workers than the older generation."

In a regional race-to-the-bottom, other Asian countries are also luring manufacturers with even lower wages, reports ChinaFile. The monthly 3,483 yuan an average Chinese worker earns drops to 911 yuan in Vietnam and 603 yuan in Cambodia, according to the International Labor Organization.

Japan may come more readily to mind when thinking of advances in robotics, but for sheer numbers, China is now the undisputed leader, surpassing Japan as the world's biggest market for industrial robots in 2014, according to the International Federation of Robotics (IFR).

China installed 32,000 manufacturing robots in 2013 alone — representing 20% of worldwide installations —  bringing their operational total to over 200,000, according to the IFR. By 2017 China is expected to have more robots up and running in factories than any country in the world.