Japan: The Land of the Rising Provocateur? 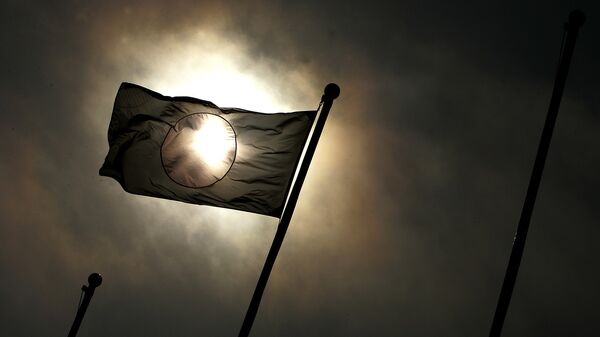 Andrew Korybko
All materials
Some in Asia are on edge because Japan’s remilitarization reminds them of World War II-era aggression and atrocities.

US Strategic Goal in Asia? Disrupt China's Peaceful Development - Media
The US and Japan have just agreed to sweeping changes in the new security agreement that underlies military relations between the two mutual defense allies. Tokyo had earlier been pressing for a more assertive role in Asia, but the US took it one step further, having now indicated that the joint alliance will be global in nature.

China has reacted with concern that Japan’s remilitarization is violating its own constitutional restraints on having a standing army and deploying its military forces abroad, but the US and Japan appear not to care in the least, repeating the mantra that “it’s not aimed against China” despite all evidence pointing to the contrary.

What’s happening is that the US is using its Japanese “unsinkable aircraft carrier” to completely revise the post-World War II order in Asia in an effort to contain China, which is a surefire recipe for a new “Pacific Rim” of destabilization stretching from Northeast to Southeast Asia.

Change The Guidelines, Break The Rules

The evolving guidelines between the US and Japan were announced last week during two significant events; the visit of US Secretary of Defense Ashton Carter to Japan and Japanese Prime Minister Shinzo Abe’s visit to the US. The combined result of this has been the unveiling of a new security agreement between the US and Japan, the most significant details of which are as follows:

China Urges US to Refrain From Belligerent Rhetoric, Actions in Asia
The US wants to use Japan as its regional anchor for the global missile defense shield (the other two parts are in Eastern Europe and the Mideast), which in effect would work to undercut China’s nuclear deterrent and could possibly even adversely affect Russia’s.

Significantly, the US says that the military relationship with Japan is now global in scope, meaning that Tokyo could theoretically provide assistance to the US and its allies anywhere in the world, although in reality this is more likely an allusion to increased Japanese involvement in the South China Sea.

While the US has always maintained that Japan is protected by its nuclear umbrella, it recently underscored that this also extends to the Japanese-administered islands that are disputed with China.

Taken together, these three major steps signify Washington’s military support for whatever moves Tokyo chooses to take, including a potential escalation of the East China Sea island dispute. After all, given the fact that the US reiterated that its nuclear umbrella extends to the disputed islands, and plus the fact that it aims to construct missile defense infrastructure in the Japanese Home Islands, it’s reasonable that Japan would feel emboldened to act aggressively per America’s full approval. Furthermore, given the ‘global’ (read: South China Sea) role with which the US has bequeathed Japan, it’s likely that such aggression will carry south into China’s soft and highly contentious maritime underbelly. All of this equates to a changing strategic calculus that shatters the post-World War II geopolitical stability that had been a mainstay of regional relations for the past 70 years.

Three Chinese Vessels Enter Disputed Japanese Waters in East China Sea
Japan’s latest moves correlate perfectly with the joint vision that its leadership shares with its American counterparts, which is for the “unsinkable aircraft carrier” to form the anchor of the Chinese Containment Coalition (CCC) in Northeast and Southeast Asia. Unfortunately, the only historical template to abide by is that from the Imperial period before and during World War II, hence the heightened sensitivity expressed by the Chinese towards Japan’s remilitarization.

The US evidently feels that such feelings are unwarranted, as Obama’s chief Asia advisor Evan Medeiros, in response to China’s plans for a military parade commemorating the 70th anniversary of Victory Day in Asia, is quoted by a Reuters-acquired State Department transcript as saying:

Medeiros’ statement is unsubtly expressed victim shaming, in that he’s denying one of the most highly victimized parties of World War II the right to commemorate the martyrdom of tens of millions of its citizens. The remilitarization of Japan quite rightly evokes poignant memories of aggression, brutality, and war crimes, much as how a German remilitarization would trigger the same in Europe if it ever came to pass in such a manner. Some of the survivors of the Japanese atrocities are still alive today in China, thus giving the commemorative ceremonies a personal significance for many.

Part of the reason the US is behaving in such an uncouth manner about China’s legitimate sensitivities is because it identifies Japan’s remilitarization and expansion of influence to Southeast Asia as being one of the main components of the Pivot to Asia, and it thus doesn’t care about China’s concerns. Simply put, in order for the US to retain dominance in the Asia-Pacific, it needs to have an empowered and emboldened Japan complementing its regional bidding, which amounts to Tokyo fulfilling the role of America’s predominant Lead From Behind proxy in the area.

The US’ strategy to militarily promote Japan as the East Asian counterweight to China is set to hit its fair share of snags, although it remains to be seen whether these could be mitigated by the opportunities available:

This constitutional clause has traditionally been taken to mean that Japan cannot partake in the activities that its current leadership and the US want it to, hence why Abe and his Cabinet had to ‘reinterpret’ the document last summer in order to justify their current actions. Still, most of the Japanese people are opposed to this, and it’s not clear at this point whether this can manifest itself into a tangible political counter-push or not.

Seoul is straddling between Beijing and Washington, and any movement closer to China would spell disaster for Japan’s aspirations to exercise proxy hegemony over its neighbor. It’s not likely that the US would let South Korea drift too far out of its orbit before partaking in ‘corrective measures’ (be it blackmail of leading political figures, provocations, etc.), but if the country is nudged ever so slightly closer to China, it might be enough for it to reject a deepened military partnership with Japan (of which negative World War II memories run deep).

In order to become a more active player in the South China Sea, Japan will need to secure docking rights for its naval forces. It would also ideally have to procure some bases, too, whether de-facto or de-jure, but it currently lacks the appropriate military agreements to make these happen.

Abe will likely continue doing what he and his Cabinet have already done, which is unilaterally reinterpret the Constitution as suits their agenda. He probably feels encouraged by his party’s sweeping electoral success during last year’s snap election, and prior to the next one that must take place prior to December 2018 (a relatively long time, politically speaking), all kinds of provocations can be staged against China to manipulate public support for a proposed constitutional referendum on formally doing away with Article 9.

Nothing serves the US and its grand strategic planners better in ‘justifying’ their military footprint in Northeast Asia than North Korea, the ‘convenient fool’ of American foreign policy. Its reactions and rhetoric in response to the US’ provocations have already resulted in the formalization of a three-way military relationship between South Korea, the US, and Japan, and it’s forecast that any forthcoming repeat of this pattern will only embed Japanese-American influence deeper into the peninsula and prevent its possible pivot towards China.

The key to Japan’s military engagement with Southeast Asia lies in the strategic partnerships it’s already made with Vietnam and the Philippines, which could potentially provide the gateway to acquiring the docking and basing rights it so desperate needs in order to be a regional power. More than likely, it’ll occur in the Philippines before it does with Vietnam, seeing as how the former is another of the US’ “unsinkable aircraft carriers” and that Washington could exert influence on the impoverished island nation to acquiesce to a Japanese ‘rotational presence’ like the one the US already has.