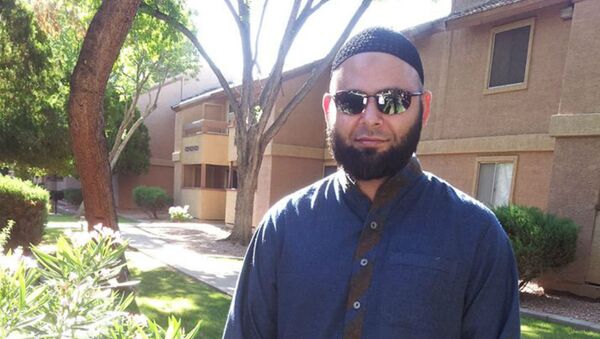 The second gunman in Sunday's shooting in Garland, Texas has been identified as a small business owner from Phoenix not previously known to law enforcement authorities.

The US Federal Bureau of Investigation earlier identified one of the shooters in the attack as Elton Simpson from the US state of Arizona. The second shooter, Simpson's roommate, was identified as Nadir Soofi, 34.

Soofi was not on the FBI radar, as far as law enforcement officials are reporting. According to Soofi's Facebook page he had attended the International School of Islamabad, graduating in 1998. He also attended the University of Utah from 1998-2003 and studied pre-med, but he left before earning a degree, according to the Washington Post.

He was currently the owner of a carpet cleaning business in Phoenix, Arizona.

Meanwhile, the authorities had investigated Simpson, and in 2010 he was arrested and charged with lying to federal agents about terrorism, according to court documents cited by the Post.

In May 2009 Simpson allegedly told an FBI informant "It’s time to go to Somalia, brother." Simpson said, "It’s time. I’m tellin’ you man. We gonna make it to the battlefield…it’s time to roll."

The judge, Mary H. Murguia, ruled that the government failed to make their case that he was travelling for the "purpose of engaging in violent jihad." Simpson was instead convicted of the lesser charge of lying to federal agents, and was sentenced to three years' probation.

"He didn't seem to me to be any threat to anybody," Simpson's lawyer, Kristina Sitton, told the Post in a telephone interview Monday. "He seemed to be very kind but entrenched in Islam. He wouldn’t shake my hand."

On Sunday evening, Simpson and Soofi opened fire on a security guard at the Curtis Culwell Center in Garland, Texas, which was hosting the "First Annual Muhammad Art Exhibit and Contest," where nearly 200 people were present.

The Muhammad Art Contest, held in the Curtis Culwell Center in Garland, a city to the northeast of Dallas, was organized by the American Freedom Defense Initiative (AFDI). The contest offered a $10,000 prize for the best cartoon depicting the Prophet Mohammed.

The AFDI "acts against the treason being committed by national, state, and local government officials, the mainstream media, and others in their capitulation to the global jihad and Islamic supremacism," of the according to statements on their website.

The group — which also claims to do battle with "the federal government, and the rapidly moving attempts to impose socialism and Marxism upon the American people," — is described by the Southern Poverty Law Center as an active anti-Muslim hate group.

AFDI President, Pamela Geller, 56, a conservative blogger and author describes herself as a free speech advocate. She writes for conservative outlets like Breitbart.com and World Net Daily, and has garnered headlines for various campaigns targeting Islam.

Writing at her blog, Atlas Shrugged, Geller was central in the effort to block construction of a Muslim community center in the vicinity of Ground Zero, calling it a “911 monster mosque."

Perhaps most visibly, she purchased advertising space on major urban transport systems carrying anti-islamic messages and using inflammatory images of, for example, Hitler or the Twin Towers on 9/11. Some of the ads denounced "Islamic Jew-Hatred" and to call for an end to any US aid to Islamic countries, and she has referred to Muslims as "savages."

In an appearance on CNN after the Garland shootings, Geller defended the art and cartoon contest to host Alisyn Camerota as a celebration of free speech.

"Increasingly, we’re abridging our freedoms so as not to offend savages," Geller alleged. "The very idea that if something offends me, or I’m insulted by something I’ll kill you and somehow this is okay with members of the elite media, and academia, is outrageous."

Geller maintains she is not Islamophobic, a contention she repeated in the interview after the shooting.

"I am anti-jihad, I am anti-Sharia," Geller told Camerota. "You, by saying I paint with a broad brush, are saying all Muslims support jihad. Alisyn you sound very Islamophobic."

David Spencer, director of Jihad Watch and an associate director at the AFDI, told Sputnik Monday that the response of Western powers to Islamist attacks on free speech was insufficient and would invite more violence.

Spencer warned that "because of the weakness, pusillanimity and willful ignorance of Western leaders, there will be many more" incidents of violent intimidation to "censor free speech."