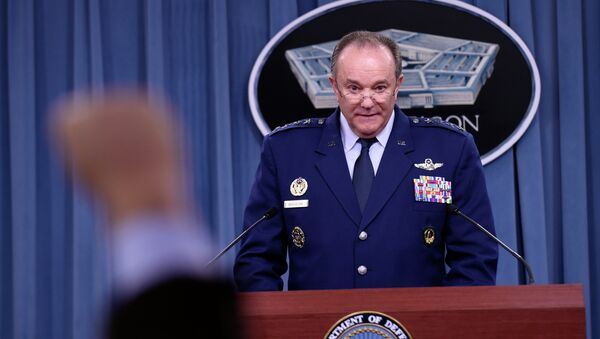 The bellicose and highly politicized commentary of General Philip Breedlove regarding Ukraine is dangerous proof of the consequences of a breakdown of the division between civilian government and the military, says Daniel McAdams of the Ron Paul Institute.

Independence Supporters in South East Ukraine Follow Russian Orders - NATO
US General Philip Breedlove, who serves as the Commander of US Command Europe, has made a series of loud, bellicose pronouncements regarding what NATO should be doing in Ukraine, including statements that the US should provide offensive weaponry, claims that independence supporters are commanded by the Russian army, and commentary that no tools available to the US should be off the table if it serves US interests.

Daniel McAdams, political analyst and Executive Director of the Ron Paul Institute for Peace and Prosperity, argues that the 'politicized' US General "is a good example of what happens when the division between a military and the civilians who in a democratic society should control that military breaks down."

McAdams notes that "while there have been plenty of 'political' general officers in the past, Breedlove has shown a particular predilection for infusing his policy preferences –and even fantasies –into what should be objective assessments of military capabilities and threats."

The analyst notes that Breedlove has used "every opportunity to report to the media dozens of scare stories of Russian invasions of eastern Ukraine," all without presenting any evidence, something which has rattled both the US's NATO partners and its own intelligence community.

McAdams also believes that General Breedlove is being hypocritical, noting that despite his repeated statements on Russian involvement in the war, "he has not provided evidence that Russia is doing covertly what we know the US is doing openly…Does it not seem like double standards for the US to criticize in others what it is openly and enthusiastically doing itself?"

The Military in Politics is a Threat to Peace and Democracy

McAdams argues that "when US generals are allowed to shape policy to the degree that Breedlove has been afforded, there is a particular danger of every problem becoming a nail. The hammers may be thrilled, but the nation under such military rule suffers from limited inputs and often unsophisticated analysis that leads to policy mistakes —in this case potentially catastrophic."

NATO Chief Misspeaks on Providing Ukraine With US Lethal Aid
The analyst ultimately suggests that President Barack Obama should 'pull a Truman' and relieve General Breedlove of his command, citing the precedent of President Harry Truman's sacking of Douglas McArthur during the Korean War after the latter made statements contradicting the administration's policies, including suggestions that the US use nuclear weapons against China.
Newsfeed
0
Access to the chat has been blocked for violating the rules . You will be able to participate again through:∞. If you do not agree with the blocking, please use the feedback form
The discussion is closed. You can participate in the discussion within 24 hours after the publication of the article.
To participate in the discussion
log in or register
loader
Chats
Заголовок открываемого материала