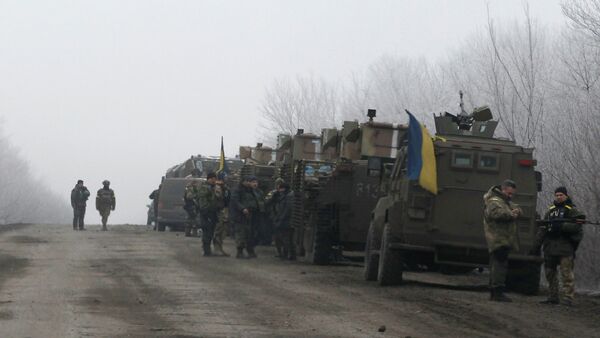 Prominent American historian Stephen Cohen believes that Ukraine is the epicenter of a global geopolitical transformation, and that the world as it existed before the crisis will never be the same again.

Speaking on the John Batchelor radio program, Dr. Cohen observed that while "we talk each week about the micro and macro events emanating from the Ukraine crisis, we're living through a geopolitical transition, and to what we do not know." In any case, "the world will not again be the way looked 5-6 years ago, at least in Europe. These are historic times, and the epicenter is Ukraine."

Noting that the "essential confrontation" in the conflict "is between the United States and Russia," Cohen believes that Europe and China too are reconfiguring and reorienting themselves around events in Ukraine.

NATO Commander Backs US Providing Offensive Weapons to Ukraine
Speaking about the dangers of the military conflict in Ukraine spreading into a wider regional war, Professor Cohen warned that "very loud and authoritative voices in Kiev, Washington and in the NATO Headquarters in Brussels, are saying almost daily that a larger war is coming and coming soon. Each blames the other; Kiev, Washington and Brussels are saying that Russia is going to launch this war. But Moscow is warning that all this war talk is preparation for a Kiev-led US-backed assault on eastern Ukraine. The appearance of American, Canadian and UK trainers to train Ukrainian National Guard makes Moscow think that this too is part of the preparation."

Russia Does Not Seek to Rebuild the USSR, or a Traditional Sphere of Influence

Ukrainian Battalion Commander Claims War in East is 'War of Civilizations'
Commenting on the growing tendency by Western politicians and media to say that Russia is looking to rebuild the Soviet Union, Dr. Cohen argues that "there is absolutely no evidence" to confirm this claim. The academic notes that Russia "doesn't have the resources, the ideology, the inclination, or the popular support. The leaders have another mission in mind: They are busy rebuilding at home the Russian state that collapsed in 1991, 25 years ago," which had tremendous negative ramifications in every sphere of national life.

Moreover, disputing theories that Russia seeks to build a new, Soviet-style sphere of influence, Cohen argues that what Russia wants is something he calls a zone of security, not a sphere of influence: "[The] sphere of influence in military terms, which is an 18th and 19th century concept, is completely, utterly obsolete; missiles can fly 3 minutes across an entire sphere of influence; there's no defense against them in that sense; that's why Russia is adamantly protesting the US and NATO building missile defense right on Russia's border. It wants these areas on its border free of military threat."

Ultimately, Cohen asserts that what Russia wants is a zone of security, meaning "no foreign military bases on its borders." And he believes this is completely reasonable:

"We take what's a cliché, but a meaningful one: what if Russian or Chinese military bases showed up in Mexico and/or Canada? We would object very, very adamantly, maybe go to war over it. We threatened to do so when the Soviet Union put missiles in Cuba. So it seems to me a benign, healthy, modern day position that no great power wishes to have foreign military bases on its borders. Everybody says that's true in the West, except when it comes to Russia."

Responding to Batchelor's question about whether the Russian leadership has had debates with the US about NATO expansion before it turned into a sore spot under Putin, Cohen says that yes, the debates were held, but only privately, behind closed doors.

"President [Boris] Yeltsin in the 1990s, by virtue of his psychology, his failing health, and his collapsed economy, had put himself in the position of being a sycophant of the United States. When Clinton decided in the second half of the 1990s to begin the eastern movement of NATO, Yeltsin did protest, privately. And he was told 'why would you protest? This is no longer a military organization, this is about political democracy, so it'll be good for you, and in addition maybe you'll join NATO one day.'"

Cohen argued that of course, "this was all eyewash. We have enough archival information to know that driving NATO was…a view that Moscow was down, and it should be kept down, and the way you keep it down was to move NATO eastward." The professor emeritus pointed out that many at the time did believe it was an unwise decision, and ultimately "a rooster that would come home to roost, as it has now."

Commenting on a new Russian documentary entitled 'President', a film about Putin's 15 years in high politics featuring over an hour long interview with the president, Cohen points out that in the film, Putin explains the he had long held to the illusion that the East-West conflict was based on ideology. Paraphrasing the president's words, Cohen noted that even after communism was gone, the West "continued to behave as they have always behaved, animated not by anti-communism, but by geopolitical ambition." Cohen notes that the film helps "to explain why [Putin] has evolved personally, from a man who sought a full partnership with Washington and Europe, even suggesting that Russia might join NATO, to the man who has now drawn a line in the sand in Ukraine."

Ukraine Left Out in the Cold

Last month, EU officials stated that there would be no further expansion of the political and economic union over the next decade. In Dr. Cohen's view, this was a crushing blow to all of Kiev's aspirations. "This left Ukraine in the Cold. The whole Maidan uprising, the whole political conflict over trade agreements was about bringing Kiev into the European Union. So we've had 14 months of war and death and destruction, and the destruction of the international order, probably irreparably, and the end result is 'nevermind'."

Cohen firmly believes that whether someone likes it or not, "without Russia, Ukraine cannot survive economically. This is just a fact." Citing close trade ties, dependence on remittances by Ukrainians working in Russia, and two decades of discounted energy supplies, Cohen noted that Ukraine "is losing everything" in the present conflict, adding that "this is a folly for which historians will severely condemn the policy makers behind it."