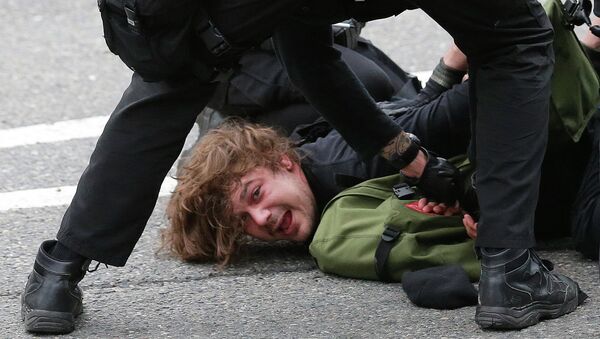 The annual anti-capitalist demonstrations, which are held on May 1, tied in this year with protests against police violence, according to local media reports.

May Day Rallies Around the World
According to the Seattle Police Department’s Twitter account, at least three officers were injured with two being seriously hurt. 16 people were arrested overnight.

"This is no longer demonstration management, this has turned into a riot," Seattle Police Captain Chris Fowler said in a statement.

In Oakland, protestors smashed more than 100 windows at businesses, restaurants, and banks along their route. On the lot of a local car dealership, at least one vehicle was set ablaze and several others were damaged.

In Portland, demonstrators threw objects at police and tried to force themselves onto a bridge. At least one officer was injured, according to the Portland Police Department’s Twitter account.

Several other rallies, however, occurred without incident. In Baltimore, some quiet demonstrations celebrated the charges made against six police officers involved in the arrest of Freddie Gray, the 25-year-old who suffered fatal spine injuries while in police custody in April.