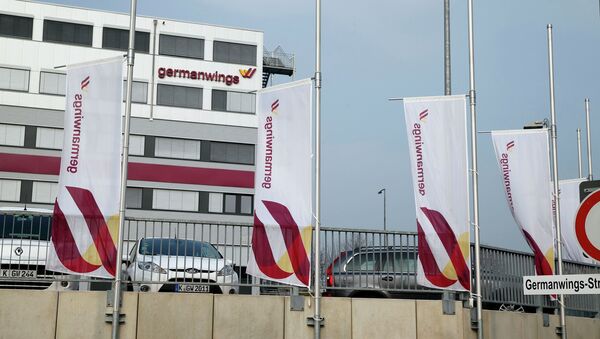 © REUTERS / Wolfgang Rattay
Subscribe
The US Federal Aviation Administration (FAA) temporarily denied in 2010 a medical certificate to a German pilot who is believed to have intentionally crashed a plane with 150 people on board in March, according to recently published documents.

MOSCOW (Sputnik) — In correspondence made public on the FAA website Wednesday, the agency did not issue Andreas Lubitz the certificate, needed to fly private and commercial aircraft, due to its awareness of his history of mental disorder.

A320 Black Boxes Analysis Confirms Investigators' Worst Suspicions
"Based on our review of the information submitted, we are unable to establish your eligibility to hold an airman medical certificate at this time," the FAA's letter dated July 8, 2010 reads.

It follows up with a request to "submit a current detailed status report from your prescribing physician" detailing Lubitz's condition and treatment record. The status report, dated July 10, 2009 and translated July 21, 2010, states "considerable remission obtained by medication" leading to the "tapering" of Lubitz's treatment.

"Because of your history of reactive depression, operation of aircraft is prohibited at any time new symptoms or adverse changes occur or any time medication and/or treatment is required," a letter dated July 28, 2010 reads.

Lubitz is known to have received psychological treatment in 2009 while undergoing training at Germanwings' parent-company Lufthansa's flying school. Intermittent bouts of depression caused him to suspend training starting in 2008.

Excerpt from the FAA's July 2010 letter to Andreas Lubitz, seeking clarification about his mental health. pic.twitter.com/Q6ODXj6Isx

The 27-year-old went on to train at Lufthansa's flight school in Arizona after his reinstatement.

Germanwings Flight 9525, en route to Dusseldorf from Barcelona, crashed in a remote area of the French Alps on March 24, killing all 150 people on board. Lubitz, the A320 Airbus' co-pilot, is suspected to have locked the pilot out of the cockpit to send the plane into its fatal descent.