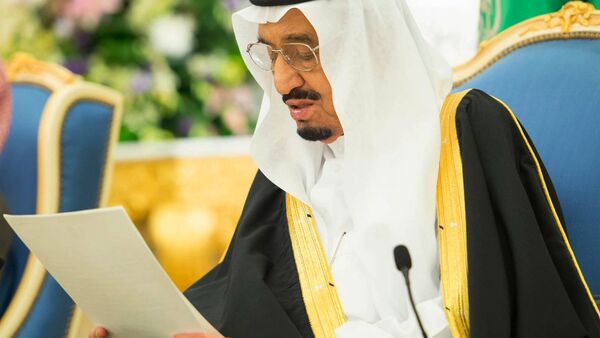 © AP Photo / Saudi Press Agency
Subscribe
Saudi Arabia is burning through foreign reserves at an unprecedented pace as the new king’s generosity toward state workers and conflict in the region further strain public finances already damaged by the slump in oil prices.

The kingdom spent $36 billion of the central bank’s net foreign assets – about 5% of the total assets – in February and March alone, the biggest two-month drop on record, according to data released this week that and obtained by Bloomberg.

Contributing partly to the drop was King Salman’s order to grant government employees and pensioners a two-month bonus after he ascended to the throne of the in January.

Salman’s fledgling reign has been marked by a heightening of the country’s rivalry with Iran – due chiefly to the Saudi-led air offensive in Yemen – as well as mounting security threats at home, two factors that resulted in a surge in military spending.

To keep up with spending on wages and investments while still hurting from last year’s 48% drop in oil prices, the government was forced to dip into reserves and borrow from domestic banks.

“This is going to be an exceptional year in terms of the drop in reserves,” Monica Malik, chief economist at Abu Dhabi Commercial Bank PSJC, told Bloomberg in an interview in Dubai on Thursday. “Even if oil stabilizes between $70 to $80 a barrel next year, there has to be some rationalization of spending objectives to limit a further deterioration in the fiscal position.”

Brent crude has recovered some of its losses, gaining 15% this year and landing at about $66 a barrel on Thursday. Income from oil exports accounts for about 90% of government revenue for the world’s biggest oil exporter. Years of consistently high oil prices allowed Saudi Arabia to amass tens of billions of dollars in reserves.

As for the king’s handouts, they are likely to encourage domestic spending and boost non-oil economic growth, Malik told Bloomberg.

If Saudi Arabia wants to make good on its desire to play a larger role in the region, it will likely have to continue spending, Ibrahim Sharqieh Frehat, a professor of conflict resolution at Georgetown University in Qatar, told Bloomberg in a telephone interview.

“We are going to see this policy continuing and being reinforced,” which sits “neatly with the vision of the king of taking a regional leadership role,” said Frehat.