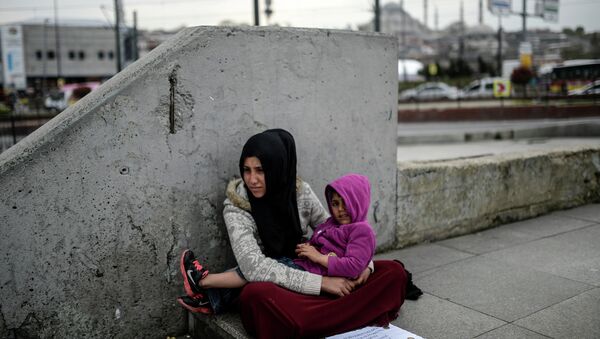 © AFP 2021 / BULENT KILIC
Subscribe
Turkey is hosting the largest community of displaced Syrians in the region, but the Syrians have the status of temporary guests, not refugees, according to the US think tank Migration Policy Institute (MPI).

Think Tank: Let in 10,000 Syrian Refugees to Boost Britain's Soft Power
WASHINGTON (Sputnik) — The Turkish government needs to implement changes in Turkey’s asylum system in order to be able to cope with an influx of displaced Syrians in the region, the US think tank Migration Policy Institute (MPI) stated in a press release on Thursday.

“Under Turkish law, asylum rights are extended only to Europeans, making Syrians temporary guests, not refugees,” the press release said. “As the conflict stretches into its fifth year, however, it has become clear that a shift in policy to encompass longer-term solutions is needed.”

Turkey is hosting the largest community of displaced Syrians in the region. Some 800,000 people could leave Syria for Turkey in 2015 amid the ongoing conflict, according to UN estimates.

The MPI said that Turkey has spent $5 billion on hosting 1.7 Syrian refugees as of March 2015.

The Turkish public has already raised concerns that the high number of Syrians is driving up housing costs and creating competition for jobs, according to the think tank.

Turkish Man Accused of Forcing Syrian Refugees Into Prostitution - Reports
The MPI also said that Turkey has neither an overarching national law nor a well-functioning international framework to govern the Syrian refugee crisis.

“Turkish reception policies were predicated on the assumption that the Syrian conflict would come to a swift conclusion, allowing the displaced Syrians to return home,” the think tank explained.

The MPI said Ankara needs to conduct policy changes that should include lifting the regulations that limit asylum rights to people from European countries, and ending the legal immigration preference for individuals of Turkish descent.

Syria has been engulfed in civil war since March 2011. Syrian forces have been engaged in battles on multiple fronts, against the so-called moderate opposition and numerous extremist insurgent groups, including the Islamic State.