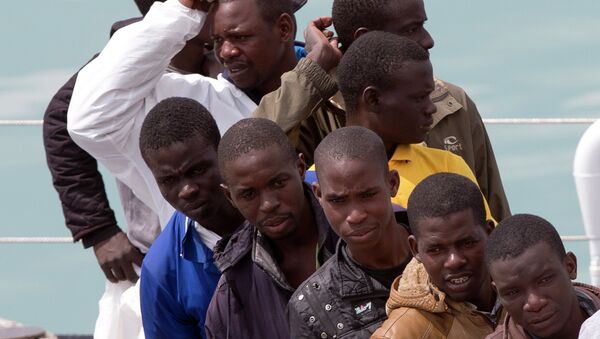 © AP Photo
Subscribe
International
India
Africa
The European Union has been accused of putting borders before people while more migrants drown in the Mediterranean Sea.

The European Trade Union Confederation (ETUC) says the EU is too preoccupied protecting its own borders and is not interested in rescuing migrants. It is calling on the European Council's President, Donald Tusk, to assemble an emergency meeting to help tackle the humanitarian crisis in the Mediterranean.

"The deaths that have followed the end of search and rescue operations last year were entirely predictable, and are all the more reprehensible as a result. Those who said that search and rescue just encouraged migration should hold their heads in shame."

In October 2014, Britain decided to withdraw any support for search and rescue operations in the Mediterranean to prevent mass drowning of migrants and refugees.

Lady Anelay told the House of Lords that search and rescue operations acted as an "unintended pull factor, encouraging more migrants to attempt the dangerous sea crossing and thereby leading to more tragic and unnecessary deaths."

The people rescued at sea often admit that they know the dangers but are so desperate to flee that they are prepared to take the risks. According to Frontex, the EU border control agency, for every boatload of 400 people, the smugglers make a clear profit of one million euros.

List of all migrants who died in the Mediterranean laid down on the floor of the European Parliament. pic.twitter.com/TiLmJhBkzd

In December 2014, the ETUC denounced the decision of the Italian Government and EU institutions to abandon search and rescue missions in the Mediterranean warning that desperate people willing to risk their lives to escape war and despair cannot be left to drown.

"Rescue cannot be left to the goodwill of passing commercial ships. The EU has a humanitarian duty to save the lives of people fleeing war and poverty."

ETUC is calling for renewed search and rescue operations and for all member states to share the financial burden with Italy, Malta and other countries that happen to be on the other side of the Mediterranean from where the migrants set sail.

And while welcoming the decision made at the EU summit, to increase the Frontex budget, as well as share responsibility for the resettlement of asylum-seekers across member states, and take action to fight criminal organisations responsible for human trafficking, the ETUC says that the mandate of the border agency Frontex hasn't changed.

2: Strengthen Triton & Poseidon massively so they can rescue more people, save innocent lives

And neither has the scope of Triton and Poseidon rescue operations — suggesting that the EU remains focused on protecting its borders, not rescuing people.

"This is not a matter of border control," said Visentini. "It is a matter of basic human decency, saving people's lives."

According to the European Council's President, Donald Tusk: "The best way to protect people from drowning is to ensure they do not get on the boat in the first place."

Speaking at a European Parliament debate, Tusk admitted that "this is a difficult and sensitive debate."

"This includes full and effective implementation of an asylum system with the same standards in all member states, and an increase in emergency aids and support teams to help process asylum claims."

Adrian Edwards, spokesperson for the United Nations Refugee Agency (UNHCR), believes that 2015 is "a time of real need in the world. Conflict and displacement are on the rise, so we're heading into 2015 looking at difficult asylum environments with more people in flight".

The ETUC is also calling for urgent measures to be agreed on by member states to relax the current EU asylum rules — with all members agreeing to adhere to them. But as Tusk said, this may prove to be a "difficult and sensitive debate."

Juncker said refugees must be shared geographically across the EU as "this is all about shared solidarity."

A proposal, concurred by Matthew Gibney, Professor of Politics and Forced Migration at Oxford University, who spoke to Sputnik News, suggests that: "The provision of asylum should be conceptualized as a shared responsibility of European states, with responsibility for refugees shared equitably between them."

But with the summer fast approaching and bringing with it more favorable seas, 30,000 more migrants are expected to make the potentially deadly journey across the Mediterranean. And whether they'll be rescued or not still remains unclear…