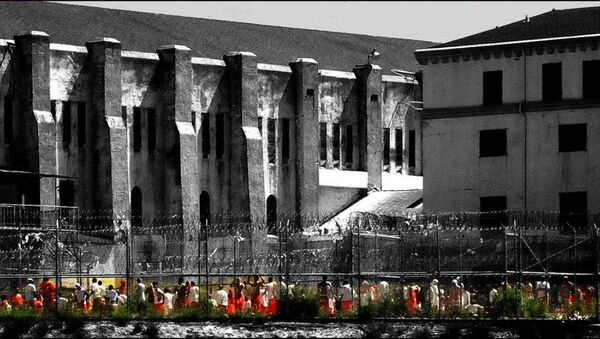 © Flickr / telmo32
Subscribe
International
India
Africa
Noelle Hanrahan, US human rights activist and director of Prison Radio, said that the way the US deals with poor people and people of color created this culture of mass incarceration.

Police Brutality, Racism in US Stems From Slavery – Don’t Shoot Coalition
NEW YORK (Sputnik) — The US authorities' discriminatory attitude toward the poor and people of color contributed to the emergence of the current culture of mass incarceration, director of Prison Radio Noelle Hanrahan told Sputnik.

"The way the US deals with poor people and people of color… created this culture of mass incarceration," Hanrahan said, adding that in the last forty years the prison population in the United States increased tenfold to over two million inmates.

"One in forty six people in the US will make prison time, and one in ninety nine is currently incarcerated, and the massive incarceration has corrupted our society," Hanrahan said.

According to the activist, the state of prisoners in the United States can be compared to slavery as many communities are allowed to financially and politically benefit from inmates while denying the latter basic political rights, such as voting.

Anti-Violence Group Steps in to Ease Baltimore Unrest
"Many communities can count their prisoners as people who live there, so they can get more representation in Congress or the Senate, yet these very prisoners that they are counting are not allowed to vote… They get paid to have people incarcerated… they are getting jobs, construction, and money, so is a kind of slavery," Hanrahan said.

Earlier on Wednesday, US presidential candidate Hillary Clinton said that the United States should put an end to the era of mass incarceration. She pointed out that the cost of incarcerating one person exceeds the average annual salary of a teacher or a police officer and that former prisoners often face unemployment and poverty.

According to the most recent statistics by the US Bureau of Justice, in 2013 about 2.8 percent of the US population, or one adult in 35, was "under some form of correctional supervision."

The debate on excessive imprisonment and other questionable correctional practices in the United States received a new impetus in the wake of mass protests against police brutality and racial profiling that followed the killing of several unarmed African-American men by white police officers.