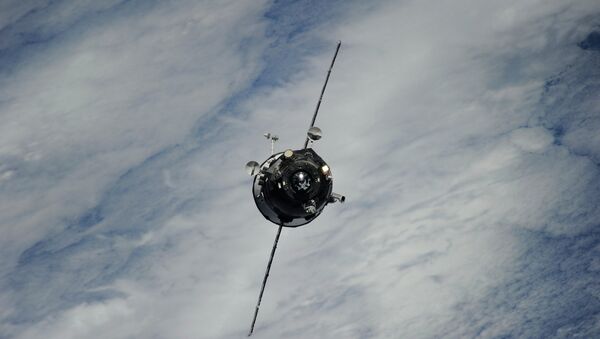 © Photo : Roscosmos
Subscribe
Most likely no one would be willing to take the risk of trying to dock the spacecraft and put the crew on board the ISS in danger, a source in the space rocket industry told RIA Novosti Wednesday.

Flight Controllers Attempting to Communicate With Troubled ISS Supply Craft
MOSCOW (Sputnik) –If space flight controllers are unable to bring the Progress cargo vessel out of its spin, it is unlikely that it will be able to dock with the International Space Station (ISS) even manually, a source in the space rocket industry told RIA Novosti on Wednesday.

"To be honest, only a miracle can save the ship. There is no telemetry, and the spacecraft has not been able to get out of its spinning and be stabilized, so a maneuver involving distance or manual docking is becoming extremely dangerous: the crew and the ISS could die [if a docking were attempted while the Progress is in spin]," the source said.

He said that no one would take the risk of trying to dock a spacecraft that would put the crew on board the ISS in danger.

"It's doubtful anyone would take that risk. It's a large responsibility, we're talking about the lives of people," he said.

He added that the Progress is carrying around 2.5 tons of cargo for the ISS and will most likely fall back to Earth slowly and burn up in the atmosphere.

"The most likely scenario is that the ship will gradually lower its orbit and then simply burn up in the Earth's atmosphere," he said.

Progress took off from the Baikonur Space Center in Kazakhstan on Tuesday at 10:10 a.m. Moscow time (07:10 GMT) and was scheduled to dock with the ISS at 4:07 p.m. Moscow time (13:07 GMT) the same day. Upon closing with the ISS the vessel's telemetry was unable to be received, and Mission Control switched to a 48-hour docking program.