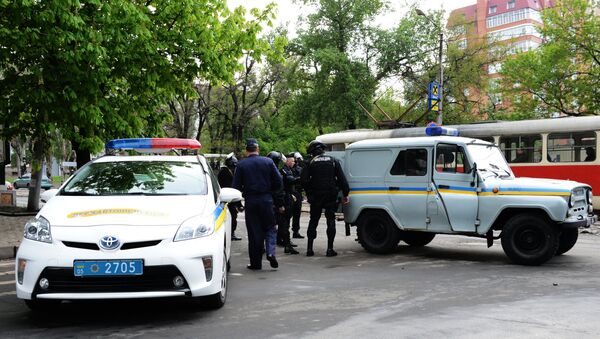 The Highway Patrol of the US state of California (CHP) trained Ukraine’s new Patrol Police as part of its first deployment overseas, the US State Department announced in a statement.

WASHINGTON (Sputnik) — The Patrol Police will replace Ukraine’s traffic police as part of an effort to combat police corruption.

More than 11,000 Ukrainians have applied to join the Patrol Police, and nearly 30 percent of the applicants are women.

The new Patrol Police cadets explain why they quit their jobs to pursue patrol https://t.co/5tGK14Qden

The first Patrol Police force of approximately 2,000 officers will report for duty in Kiev in June 2015. The new force will be deployed first in Kiev and then throughout Ukraine, according to the State Department.

“Marking the first overseas deployment by the CHP under formal partnership with the US Department of State, the CHP recently collaborated with the Ukrainian Ministry of Interior Affairs on a four-week training session for 30 Ukrainian law enforcement officers,” the statement said on Tuesday.

“The Ukrainian course graduates are now certified to instruct incoming classes of recruits for the newly established Ukrainian Patrol Police,” the statement said.

In March 2015, Ukraine’s Interior Minister Arsen Avakov announced that Ukraine is working with the United States to create a police task force unit similar to the US Special Weapons Assistance Teams (SWAT). Avakov also stated that Ukraine expects a $26-million aid package from the United States to implement police reforms and beef up border patrols.