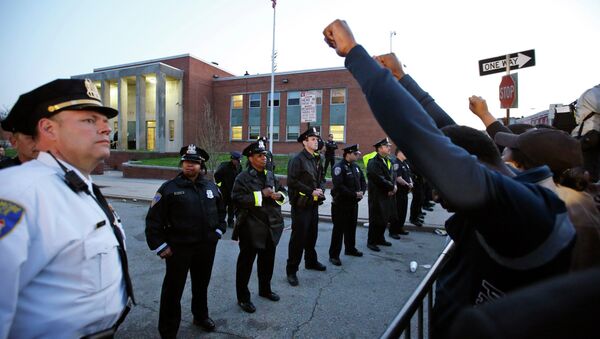 © AP Photo / Alex Brandon
Subscribe
An anti-violence group has stepped in to quell the situation that is unfolding between police and protesters in Baltimore, Maryland following the death of local African-American man, Freddie Gray, in police custody.

BALTIMORE (Sputnik) — On Tuesday, Baltimore police officers began to spray tear gas at a protester, hitting several other innocent bystanders near the area where a wave of riots ignited a day earlier.

At Least 20 Law Enforcement Officers Injured in Baltimore Riots - Police
Members of the anti-violence group that wear “300 Men March” shirts, stepped up to form a wall between the protesters and police before the situation could escalate.

Following Freddie Gray’s funeral on Monday, mass protests against his death turned into riots that resulted in confrontations with police and destruction of public and private property.

Earlier that day, Baltimore police had received threats from various gangs, including the Bloods and Crips, which forced state offices and schools to shut down for the day.

Police arrested 235 people for their involvement in the riots, which include 34 juveniles.

Violent Actions of Some Police Officers ‘Raise Troubling Questions’ - Obama
At least 20 local police officers were injured, 144 vehicles set on fire and one person is in critical condition.

Gray, a 25-year-old African American, was arrested on April 12 and died a week later as a result of severe spinal injuries received in unclear circumstances while in police custody.

Maryland Governor Larry Hogan declared a state of emergency after the riots and activated some 5,000 National Guard troops to quell the situation.

Baltimore Mayor Stephanie Rawlings-Blake announced a state of emergency and a week-long curfew in the city from 10 p.m. to 5 a.m.

The United States has seen a wave of major rallies against police brutality and racial profiling over the past year triggered by numerous police killings of mostly African-Americans around the country.