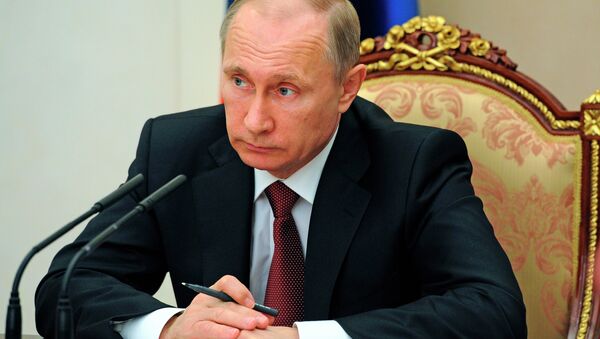 In a letter to the Treaty on the Non-Proliferation of Nuclear Weapons (NPT) conference, Russian President Vladimir Putin confirmed that Moscow has consistently fulfilled all parts of the treaty.

Enacted in 1970, the NPT is designed to prevent the spread of nuclear weapons and to promote the peaceful use of nuclear energy. These are noble goals which Russia fully supports, and President Putin assured participants of the NPT conference that all appropriate steps are being taken by the Kremlin.

"We have reduced our nuclear weapons stockpiles to minimal levels, thereby making a considerable contribution to the process of comprehensive and complete disarmament," Putin wrote. "We plan to continue this work, as well as maintain the balance between the development of peaceful nuclear [programs] and the strengthening of the non-proliferation regime, including the guarantee systems of the IAEA [International Atomic Energy Agency]."

US Portraying Russia as Violator of Nuclear Obligations – Foreign Ministry

The letter also stressed Russia’s commitment to Article VI of the treaty, which states that each party "undertakes to pursue negotiations in good faith," and agrees to disarmament "under strict and effective international control."

"[Russia seeks] to create a modern, sustainable and secure architecture of cooperation in the sphere of nuclear power," Putin added.

He also stressed importance of the treaty in ensuring a peaceful future.

"We believe that the balance between the three key components of NPT – nuclear non-proliferation, disarmament and the use of nuclear power for peaceful purposes – guarantees its relevance in the future," he said.

The treaty consists of three pillars – non-proliferation, disarmament, and the peaceful use of nuclear energy – and the conference met in 2010 to enact a fully-formed Final Document.

Including “practical steps” for implementing the pillars, Putin sees that 2010 finalization as a crucial and beneficial step.

"I hope that during this conference all NPT signatory states will reaffirm their readiness to strictly abide by their obligations. Beyond any doubt, this will become an important factor of strengthening peace, stability and security on our planet," Putin wrote.

Despite President Putin’s assurances, the West continues to accuse Russia or violating nuclear weapons treaties without any evidence.

"Today, the US side voiced new allegations regarding violations of the [Intermediate-Range Nuclear Forces Treaty] INF treaty, refusing, or, more likely, being unable to support these allegations with concrete facts," Mikhail Ulyanov of the Russian Foreign Ministry said Monday. "Accusing others of violating the NPT, the United States forgets that its own track record in this area is far from ideal."

Despite accusations by US officials of Russian violations, Washington has steadily delivered nuclear weapons to NATO allies, justifying such actions with a technicality in the NPT.

"We are rather puzzled as to why all of a sudden this issue has emerged," US Under Secretary for Arms Control and International Security Rose Gottemoeller said earlier this month, in response to Moscow’s accusations of US NPT violations. "It was discussed during the negation of the NPT during the late 1960s, the record clearly shows that the United States conveyed at the time that these weapons are not somehow shared with our NATO allies, but in fact remain under operational control of the United States."