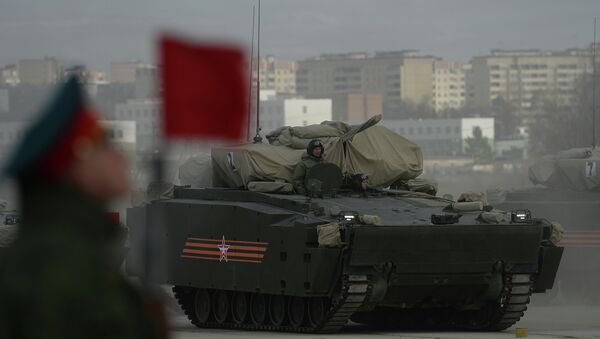 World
Some World Leaders Too 'Scared' to Visit Moscow for Victory Day – Lavrov
The upcoming parade marking the 70th anniversary of the Soviet Army's victory over Nazi Germany in World War II is set to become the largest in Russia's recent history. Over 15,000 personnel and about 200 pieces of military equipment will be on display, including weaponry never before seen by the public, according to Defense Minister Sergei Shoigu.

Sources in the ministry told RIA Novosti guests and residents of Moscow will be able to witness the parade ahead of time on Wednesday and next Monday. The Armata, the Kurganets-25, the Kornet-D and the Koalitsija-SV will be driven during a run-through in the early hours from northwest Moscow to Red Square.

Dress rehearsals that will also include military aircraft are scheduled for early Thursday, May 7.

Western analysts admit that the T-14 Armata may be the most advanced and deadliest tank in the world. Germany's Stern magazine wrote that this tank is the first major embodiment of innovations in the Russian defense industry since the breakup of the Soviet Union. US analysts believe that Armata might leave the US Army and its M1 Abrams tank far behind.

The Russian Defense Ministry posted a photograph of the new tank last week.

"The tank utilizing the Armata Universal Combat Platform is intended to be used as the new main battle tank of the Russian Army. It has entirely new specifications and performance and a new automatic loader," the description reads.

The Armata's main feature is an unmanned turret, which is controlled remotely from an isolated armored capsule. The tank has a unique radar system that can simultaneously track up to 40 ground and 25 air targets within a 60-mile radius.

The Armata will be followed by the Kurganets-25, the first Russian armored infantry fighting vehicle whose crew sits in a compartment that separates it from ammunition and the ordnance section. The Kurganets' armor features a new active-defense system that can resist armor-piercing tank shells.

The contemporary Boomerang wheeled combat vehicle, due to replace the hard-working BTR-80 armored personnel carrier, will also see the light of day for the first time.

Lowdown on the New Army Tech to Be Unveiled on V-Day (MASSIVE SPOILERS)
Plans are underway to create an entire family of Boomerang vehicles, including an armored personnel carrier and a tank, and military experts say its main feature is a rear-section hatch for landing troops.

Another first-timer in Moscow's Victory Day parade is the Typhoon-U all-terrain vehicle, developed at the Ural Automotive Plant, part of the GAZ Group automotive enterprise. This vehicle was made under the 2020 concept for the development of military vehicles and first unveiled in late 2013.

The Kornet-D, an upgraded version of the hard-hitting Kornet anti-tank system that was adopted in 2009, will also debut on Red Square.

It has an optical electronic system with a remote-controlled heat-seeking scope, high-definition TV cameras, a third generation heat imager and a laser-beam channel for missile control. The Kornet-D system can destroy enemy firing positions and aircraft, hit one target with two missiles and pierce 1,300-mm armor.

The one-of-a-kind Koalitsija-SV (Coalition) self-propelled gun, manufactured at the Uraltransmash Plant in Yekaterinburg, will also join the parade on May 9.

This artillery system is intended to kill enemy personnel and destroy equipment and fortifications. The system can hit targets over 40 miles away.