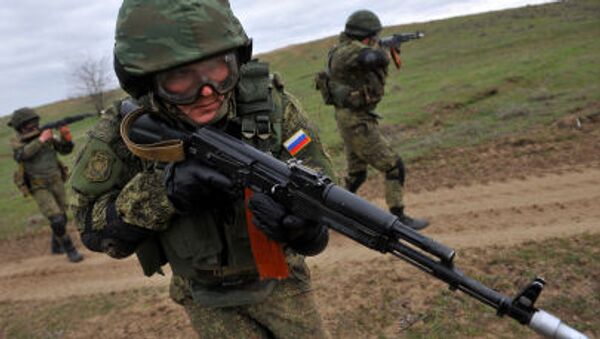 Russian Tanks, Armored Vehicles Prepare for Netcentric Warfare
Speaking at a military recruitment center in St. Petersburg, Shoigu explained that this past Saturday, the 300,000th professional soldier signed up for the Russian Army. According to the Defense Ministry, the new record figure is nearly 24,000 soldiers more than the current 276,000 serving as conscripts.

Talking to St. Petersburg resident Pavel Sidorov, who became the 300,000th contract soldier to join the military, General Shoigu noted that "the Russian Army now has more troops from the contract service than from conscription. Gradually, this figure will only increase. We hope that ultimately, the army will become fully professionalized. Good luck to you!"

By the end of 2015, the Russian Armed Forces expect to increase the number of soldiers serving under contract to 352,000. By 2020, the Russian Army hopes to raise the number further, to half-a-million. Professionals are already set to replace conscripts in all positions of command authority from the sergeant level by the end of the year, with the government also pushing hard to replace conscripts in the submarine and surface fleets. Most of the country's battalions standing on permanent readiness, as well as special purpose units, are already comprised entirely of professionals.

Russian T-14 Armata: Most Powerful Tank in the World in Details
The Defense Ministry has high hopes for a number of initiatives aimed at attracting educated, quality personnel. This includes a program inviting recent graduates from post-secondary institutions for two years of service as contract soldiers, in the place of 12 months of compulsory service as conscripts. The government also has several programs aimed at enticing servicemen for long term service, offering special subsidized military mortgages for professional soldiers and their families after three years of service.
Newsfeed
0
New firstOld first
loader
LIVE
Заголовок открываемого материала
Access to the chat has been blocked for violating the rules . You will be able to participate again through:∞. If you do not agree with the blocking, please use the feedback form
The discussion is closed. You can participate in the discussion within 24 hours after the publication of the article.
To participate in the discussion
log in or register
loader
Chats
Заголовок открываемого материала
Worldwide
InternationalEnglishEnglishMundoEspañolSpanish
Europe
DeutschlandDeutschGermanFranceFrançaisFrenchΕλλάδαΕλληνικάGreekItaliaItalianoItalianČeská republikaČeštinaCzechPolskaPolskiPolishСрбиjаСрпскиSerbianLatvijaLatviešuLatvianLietuvaLietuviųLithuanianMoldovaMoldoveneascăMoldavianБеларусьБеларускiBelarusian
Transcaucasia
ԱրմենիաՀայերենArmenianАҧсныАҧсышәалаAbkhazХуссар ИрыстонИронауОssetianსაქართველოქართულიGeorgianAzərbaycanАzərbaycancaAzerbaijani
Middle East
Sputnik عربيArabicArabicTürkiyeTürkçeTurkishSputnik ایرانPersianPersianSputnik افغانستانDariDari
Central Asia
ҚазақстанҚазақ тіліKazakhКыргызстанКыргызчаKyrgyzOʻzbekistonЎзбекчаUzbekТоҷикистонТоҷикӣTajik
East & Southeast Asia
Việt NamTiếng ViệtVietnamese日本日本語Japanese中国中文Chinese
South America
BrasilPortuguêsPortuguese