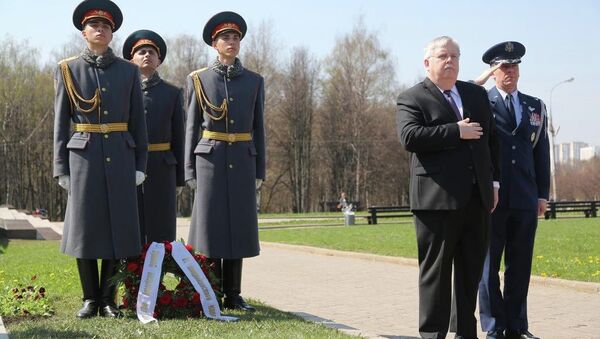 US Ambassador to Russia John Tefft and WWII veterans commemorated the meeting of Soviet and American troops in summer 1945.

Group Raises Awareness for Elbe Day Through 1,500 Mile Road Rally
MOSCOW (Sputnik) — US Ambassador to Russia John Tefft and WWII veterans laid flowers on Tuesday at the Spirit of Elbe memorial in Moscow to commemorate the meeting of Soviet and American troops in summer 1945.

On April 25, 1945, Soviet and American troops met at the River Elbe, near the town of Torgau in Germany, a key milestone in the end of the Second World War. The meeting marked that Americans advancing from the West and Soviets advancing from the East has successfully cut Nazi Germany in two.

Participants of the historical encounter of the Soviet and American troops on the River Elbe, Ivan Mozgovenko and Frank Cohn, attended Tuesday's ceremony.

The ceremony took place as part of the Victory Day celebrations in Russia to commemorate the 70th anniversary of the end of World War II.

Russia will be holding its annual Victory Day parade on May 9. Some 26 state leaders have confirmed their intention to visit Moscow and join the celebrations in 2015.