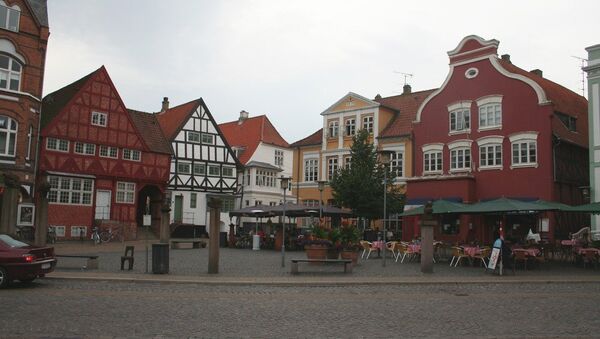 © Flickr / fredesorensen
Subscribe
A roadside sign in the Danish town of Haderslev, close to the German border, lasted only two weeks before it was taken down and thrown over a wall.

Leaflets Found in Copenhagen Scare Denmark With New Terror Attacks
A sign in the town of Haderslev, known in German as Hadersleben, is to be displayed in a museum rather than on the street, after it was torn down from its position at the side of a bypass and thrown into an adjacent park.

"It's a week that the German minority in North Schleswig won't forget quickly," wrote the German-language Nordschleswiger newspaper, which serves Denmark's German-speaking community of approximately 15,000, a legacy of its history as part of the Duchy of Schleswig, which became German territory after the Second Schleswig War of 1864, before returning to Denmark in 1920 as part of the Treaty of Versailles.

The sign was put up in the town earlier this month, when the town's mayor Hans Peter Geil said optimistically, "I want to see how long it is, before somebody notices it – and what the reaction of the people will be."

In this video from the German Schlewig-Holstein news website, members of the area's German-speaking minority explain the importance they attach to bilingual signs.

On Monday Denmark's P4 Syd TV Channel reported Geil said he repeated his "experiment," which was keenly followed in the region of Southern Jutland, as he "doesn't want Haderslev to be known as a place of enmity," adding that he fears removing the sign "will become a sport."

The decision to display the sign was the subject of fierce debate in the region, where petitions in March from German residents in the neighboring towns of Tonder and Aabenraa for the towns' signs to include their German names of Tondern and Apenrade were rejected by local politicians.

"It will take several generations before Southern Jutland will have fully come to terms with the past," the chairman of the cross-border organization Graenseforeningen told the newspaper Kristeligt-Daglbad. "Southern Jutland residents aren’t yet ready to have German town names on the signs."

Puppet Party Aims to Pull Strings in Denmark's Election
One Haderslev resident told Flensburger Tagesblatt, based south of the border in Germany, where signs have been in Danish and German since 2008, that "there are some Danish people who have very strong national feelings."

The unsuccessful "experiment" with the sign in Haderslev is set to be consigned to the history books; the sign will be displayed in the local Museum of Southern Jutland, which asked for the sign so that it could display it in its exhibition on the history of the border region.