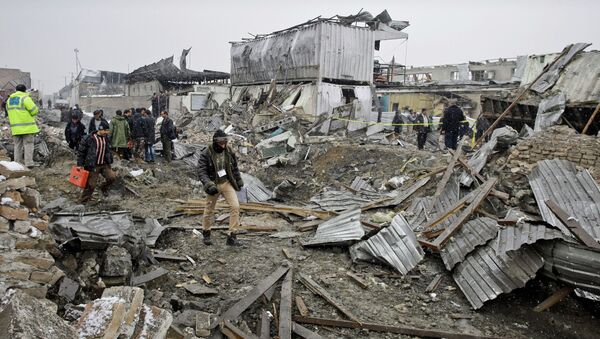 The Pentagon cannot account for $1.3 billion that was shipped to military commanders in Afghanistan from 2004 to 2014 for critical reconstruction projects, an internal report released Thursday concludes.

That sum represents 60% of the money the US sent directly to military officers in an effort to bypass bureaucracy and expedite the construction of essential infrastructure that was urgently needed.

The United States has spent a total of $100 billion to rebuild Afghanistan over more than 13 years of war. About 70% of that money went through the Pentagon, while the rest was distributed by the US Agency for International Development and other civilian departments.

A yearlong investigation by the US special inspector general for Afghanistan reconstruction found that the Pentagon could not – or would not – provide basic information about what happened to 60% of the $2.26 billion it had spent over ten years on the Commander’s Emergency Response Program (CERP).

“In reviewing this data, SIGAR found that the Department of Defense could only provide financial information relating to the disbursement of funds for CERP projects totaling $890 million (40 percent) of the approximately $2.2 billion in obligated funds at that time,” states the report, a copy of which was obtained by McClatchy DC.

The report divided the Pentagon expenditures into 20 categories, such as transportation, education and healthcare, among others. The most money by far, however, fell into a 21st “unknown” category, McClatchy DC reported.

The US also made “condolence payments” to Afghan civilians, or their families, who died or were injured because of the war, as well as “hero payments” to the surviving spouses or next of kin of Afghan soldiers or police killed in the conflict.

The report is the latest to come from the special inspector general for Afghanistan reconstruction – a post Congress established in 2008 to track US non-military aid to Afghanistan – that reflects billions of dollars lost to waste or corruption.

In a report released last July, special inspector general found that many of the tens of thousands of AK-47 assault rifles and other weapons the Pentagon had shipped to Afghanistan since 2004 had gone missing, sparking worry that they had fallen into the hands of Taliban or other insurgents.

Annual spending on the Commander’s Emergency Response Program peaked in 2009 at $500 million, or 23% of all the money it doled out over ten years. That same year, President Barack Obama sent additional troops to Afghanistan.