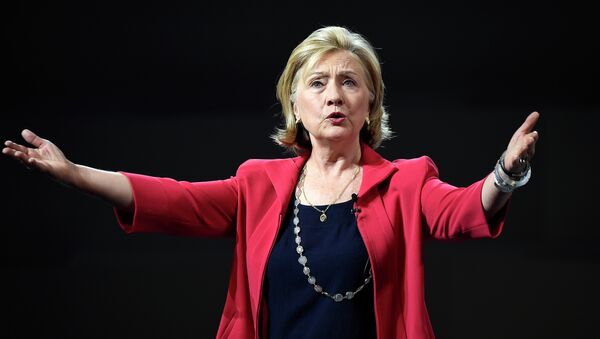 © AFP 2021 / RONALDO SCHEMIDT
Subscribe
US citizens need to trust that Hillary Clinton will not sell the United States to any foreign country or interest in order to be sure she will protect the country’s sovereignty, US Senator and presidential candidate Rand Paul stated on Monday.

WASHINGTON (Sputnik) — The Clinton Foundation admitted Sunday that the charity made mistakes on how it decided to list government donors on its tax returns, saying the Foundation will make sure it does not happen again.

Established in 2001, The Clinton Foundation has been scrutinized over continuing reports claiming that it accepted millions of dollars in foreign donations from foreign governments and entities while Hillary Clinton served as US Secretary of State, potentially leading to conflict of interest.

Hillary Clinton More Likely to Win Than Rand Paul in Election, Experts Say
“You have to trust in your commander-in-chief that they wouldn’t actually sell the country,” US Senator and presidential candidate Rand Paul said on the Fox and Friends morning television show.

“Secretary of State is an incredibly important position, she got to be on the approval of whether or not a uranium company was sold to Russia, and she allowed it to happen while receiving money from the shareholders.”

Paul said he has spoken to US Senators about whether or not a congressional investigation will be held into the matter.

“I favor an investigation of this, because we need to know that [what happened],” Paul said. “I think it’s worrisome that the Russians now own a uranium company that does 20 percent of the mining uranium in our country.”

Rand Paul, a 52-year-old ophthalmologist from the US state of Kentucky, is a son of Ron Paul, who ran unsuccessfully for the US presidency in 2012. Rand Paul says he advocates tax and military budget cuts, but he recently suggested increasing US military spending by 16 percent ahead of seeking the Republican nomination for president of the United States.