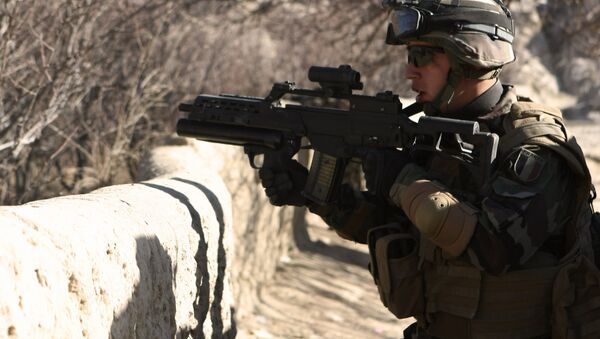 © AFP 2023
Subscribe
International
India
Africa
Police chiefs in the UK have called for a review into an assault rifle used by anti-terror officers and some military forces after a report claimed that the German-made weapons did not shoot straight when hot.

A report commissioned by the German defense ministry investigating the effectiveness of the weapons revealed that the G36 rifles become very inaccurate when they overheat.

The report found that the rifles could miss targets after being exposed to hot conditions, high humidity or by being fired in rapid succession.

A study proves that the G36 assault rifle used by UK counter-terror police is seriously inaccurate in warm weather. pic.twitter.com/6rEzmY2MG7

The leaked report, as seen by UK newspaper The Sunday Times, found that the rifles reportedly missed targets when temperatures got to 30C, while other reports in German media claimed that some shots from 500m missed their targets by as far as six metres.

Meanwhile, it was also reported that the G36 rifles became hot and unreliable after firing just 60 rounds of ammunition.

Germany Has 'No Use' For G36 Rifles

‘Nicht Gut’: German MPs Cancel Orders for G36 Rifle
The issue of whether to use the rifles has also been debated recently in Germany, with German defence minister Ursula von der Leyen  — who commissioned the tests — saying that the G36 has "no future" in the German military.

There are thought to be between 2,000 and 3,000 G36 rifles used by British counterterrorism forces, while Special Air Service (SAS) teams in Iraq have also used them during certain operations.

Police officials were unsure of the cost of the weapons used in the UK, however the German military has spent $195 million on 178,000 G36 rifles over the past two decades.

Despite the widespread use of the rifles, which are used in more than 50 countries, the leaked reports have led to calls to have the weapons re-tested in the UK, with police chiefs asking the Home Office to investigate the results in Germany.

National Police Chiefs' Council (NPCC) lead for armed policing, DCC Simon Chesterman said that officers in the UK using G36 rifles and their ammunition had "not experienced any problems with accuracy" despite being put through a "stringent set" of tests by the Centre for Applied Science and Technology (CAST).

However, Mr Chesterman has called for a review into their use and safety, following the concerning reports in Germany.

"The reliability of any weaponry that the police service uses is of paramount importance. As a result we will refer the matter to CAST and ask them to consider the recent findings in Germany and advise us accordingly."

Following the criticism of the G36 rifles, manufacturer Heckler & Koch (H&K) have defended the weapons, saying the German defense force's decision to fit the G36's barrel with a tin covering lead to the overheating.

"H&K views any negative statements with regard to the accuracy [of the G36] as factually incorrect, irrelevant and possibly illegal."

"Decades of use by the Bundeswehr validate that the G36 was — and continues to be — fully operational," the statement read.

As part of a detailed response to the report, H&K officials also criticized the German army's decision to purchase the G36 in favor of the MG36 — a more expensive, heavier rifle.