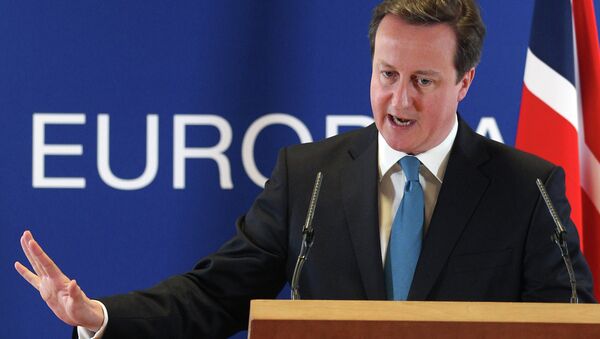 © AP Photo
Subscribe
With just two weeks to go before the British general election, which could result in an in-out referendum on the UK leaving the EU, a new study shows a Brexit would do more harm to Germany than a Greek exit would.

The latest study from Open Europe predicts a 17% chance of Britain actually leaving during the next parliament, which will be formed some time after the general election on May 7. Open Europe's Brexit Barometer highlights that this is a genuine possibility, which requires serious consideration and contingency planning.

Michael Wohlgemuth, Director of Open Europe in Berlin, has compared the impact of Grexit and Brexit on Germany and argued that the latter is more dangerous for Berlin.

Writing in the Frankfurter Allgemeine Zeitung, he said:

"A potential Greek euro-exit has unleashed panic discussions and questionable action to save it. However, a plausible UK exit from the EU is far more dangerous. Not only is Great Britain overtaking France as [Europe's] the second-largest economy with 15% of EU GDP, but in the next 20-30 years, the British GDP may even be on track to overtake Germany's…Greece's contribution to EU GDP, comparatively only constitutes 1.3%."

Brexit 2020: What Are The Odds and What Next for Europe?
More important still, from a German perspective, he argues if Britain leaves the EU, the voting weights in the EU — currently heavily favoring a liberal free-trading bloc — would shift towards a more protectionist group — led by France.

"Germany would lose an important ally…and the German taxpayer, in particular, would need to compensate for the loss of [one of the largest] contributors to the EU budget."

Pawel Swidlicki, Policy Analyst with Open Europe said that, although the Barometer shows a 17% possibility of a Brexit, which should be fully planned for, much would depend on who goes through the door of 10 Downing Street after the election.

"If David Cameron is Prime Minister there is simply no way he can avoid trying to proceed with the EU reform and referendum strategy; it is a clear red line for most of his MPs and a manifesto pledge. However, his chances of remaining Prime Minister and the prospect of an EU referendum are likely to depend on the arithmetic of a hung parliament."