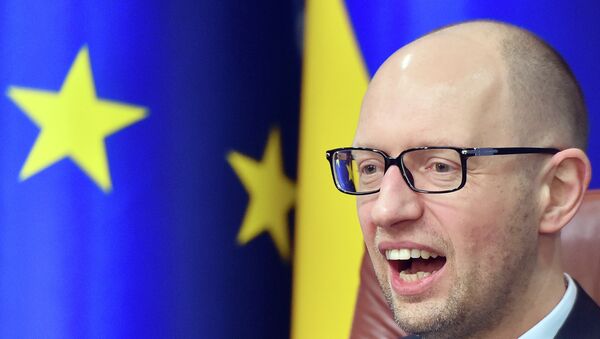 Ukrainian Prime Minister Arseniy Yatsenyuk said that Kiev did not receive some $3 billion in taxes from Ukraine's eastern conflict-torn region of Donbass.

"Three billion [dollars] of taxes is what we did not get, and losses [as a result of military action] make dozens of billions," Yatsenyuk told Ukrainian TV Channel Five.

Southeastern Ukraine is suffering from a humanitarian crisis that emerged as a result of a military operation against independence supporters, launched by Kiev authorities a year ago.

Ukraine’s Parliament Introduces 1.5% Military Tax
Kiev stopped making social benefit payments to the people of Donetsk and Lugansk regions last July. In November 2014, the Ukrainian government imposed an economic blockade on Donbass including the cessation of activity of the Ukrainian Treasury and the National Bank in the region.

Meanwhile, Russia has been sending humanitarian aid convoys to Donetsk and Lugansk since August.

In February, foreign ministers of Russia, France, Germany and Ukraine, negotiated a ceasefire deal for the warring sides in Minsk, Belarus. The agreement also stipulates full restoration of social and economic system in the country, including the payment of pensions and other social benefits.