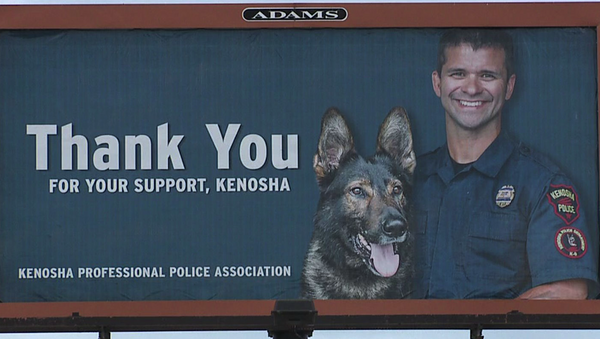 A billboard featuring a police officer involved in a fatal shooting investigation in the city of Kenosha, Wisconsin, is alarming some of the city’s residents.

The ad placed by the Kenosha Professional Police Association thanking the community for its support portrays Officer Pablo Torres, who shot 26-year-old Aaron Slier to death last March during a ten-day period in which he shot two people.

Police say Slier confronted Torres with a weapon, and that particular case is under investigation.

Guatemalan Parents Suing San Francisco Police For Shooting Immigrant Son
Torres, who is under administrative leave, has received nine citizen complaints of excessive force and seven departmental reprimands including one for failing to show up to court, according to FOX 6.

Kenosha News has called on the KPPA to take down the billboard.

“The billboard, and events such as the Back the Badge rally in Pennoyer Park on Saturday, may be intended as support for law enforcement and appreciation for that support, but they could also be seen as attempts to intimidate people who might criticize the police.”

“The recent incidents in the community have greatly impacted many people including the officer, his family, and the entire police department,” Deates said. “We have been humbled by the outpouring of support the community has given us and we simply wanted to say, thank you.”