Nazarbayev Reelected for Another Term as Kazakhstan's President - Exit Poll 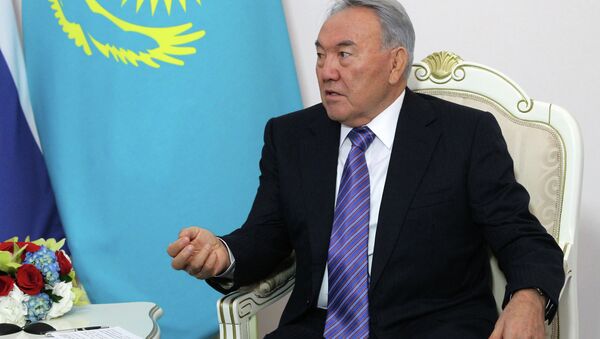 Nazarbayev, 74, has been the president of Kazakhstan since the fall of the Soviet Union in 1991. He was reelected to his fourth consecutive term in April 2011.

The elections were set to take place next year, but Nazarbayev changed the date last month, explaining the move as a requirement to avoid political instability amid a global economic crisis.

Putin Wishes Kazakhstan President a Successful Election Race
Under the Kazakhstan constitution, a candidate cannot be elected president more than twice in a row, but Nazarbayev has been exempted from this restriction by a constitutional amendment in May 2007.

The previous election runup in 2011 saw a vast majority proposing a referendum to extend Nazarbayev's credentials until 2020, but the president refused to do so. About 95 percent of Kazakhs voted for Nazarvayev in 2011.

The Kazakhstan constitution states that a candidate cannot be elected president more than twice in a row. Nazarbayev, however, was exempted from presidential term limits by a constitutional amendment in May 2007.

More than 800 observers from 19 countries at the polling stations reported no significant violations during the voting. Kazakhstan's Foreign Ministry accredited 168 representatives of foreign mass media from 37 countries.