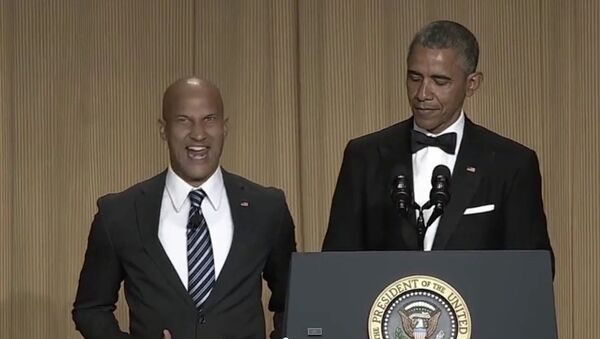 Attendees at President Barrack Obama’s White House Correspondence Dinner were treated to a surprise appearance by “Luther” – the president’s anger translator.
The character played by Keegan-Michael Key on Comedy Central’s hit show Key & Peele jokingly embodies Obama’s inner rage, which he hides when he’s in front of the cameras.

“Despite our differences, we rely on the press to shed light on the most important issues of the day,” said Obama behind a podium with Luther next to him.

Luther goes on to satirically criticize the media including FOX news, much to the applause of the president’s attendees. He even takes a jab at CNN saying it made its “wall to wall coverage” of the recent Ebola crisis sound like the world was “one step away from The Walking Dead.”

The former MAD TV star also questioned the need for a White House Correspondence Dinner in the first place.

“Jeb Bush, do you really want to be here?” Luther asks.