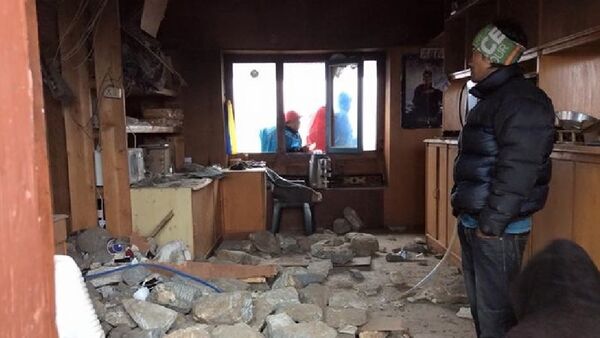 © Sputnik / Olga Dadykina
Subscribe
International
India
Africa
Olga Dadykina, who has been trekking the Himalayas for the last two months, became stranded in the Nepalese village of Namche Bazaar, at 3,440 meters above sea level. She shared her experience with Sputnik News in an exclusive interview.

Asia
Russia to Send Rescuers to Earthquake-Stricken Nepal
Rescue efforts in Nepal have intensified, aid materials are coming in and the injured are being evacuated, Olga Dadykina, currently in Namche Bazaar, a village 3,440 meters (11,286 feet) above sea level, told Sputnik News in an exclusive interview.

According to Dadykina, there are 3,000 dead in Katmandu. She added that another 18 people died after an avalanche, triggered by the earthquake, hit a base camp near Mount Everest. Among the dead at the base camp was Dan Fredinburg, an adventurous Google executive.

Dadykina and her boyfriend have been trekking the Himalayas for the last two months. When the massive earthquake occurred on Saturday, the couple was near the Tengboche Monastery at 3,867 meters.

After the incident, the two came down to Namche Bazaar, saying that they could not descend to Katmandu, as currently it is more dangerous to be in the city. It is safer to wait for help on the mountain, Dadykina said.

"Today around noon we were having lunch at a hostel. Suddenly, the ground under my feet began to tremble, the walls started to creek and everything was shaking. I felt like I was on a ship during a heavy storm. Everyone rushed towards the exit. When we ran outside, I saw part of a house falling off and realized that if the earth cracked, we would fall all the way down. I was scared to death."

The village of Namche Bazaar had another strong tremor on Sunday. All buildings remain closed; people are left without shelter. Smaller tremors and quakes continue.

The 7.8 magnitude earthquake occurred on Saturday morning not far from the country's capital Katmandu. The earthquake caused massive damage throughout the region, triggering avalanches on Mount Everest and a few tremors in neighboring areas of India, Bangladesh and Tibet.

The UN estimates that more than 6.6 million people live in the areas affected by the earthquake.