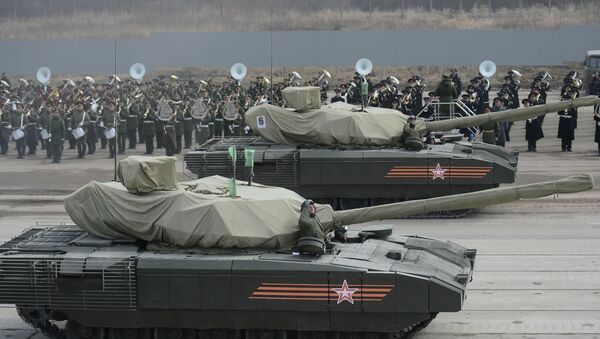 The new T-14 and the rest of Russia's new armored vehicles show a huge technological leap from the old Soviet-era military hardware.

"The new vehicles are principally clean-slate designs and represent the biggest change in Russia's armoured fighting vehicle families since the 1960s and 1970s," HIS Jane's 360 Defense Weekly reported.

The key feature of the new tank is its unmanned remotely-controlled turret, with crew members seated in an armoured capsule at the front of the tank's hull.

The T-14 is armed with a 125 mm smoothbore cannon that can fire high-powered munitions, including armor-piercing discarding sabot projectiles, guided missiles, shaped-charges and other types of munitions. The muzzle energy of the tank's cannon is greater than that of the German Leopard-2 Rheinmetall 120 mm gun, according to the Diplomat.

It is speculated that the Armata tank might also come with a 152 mm gun. If this is true, the tank will have the most powerful cannon ever mounted on a main battle tank. The T-14 will also carry a 30-mm sub-caliber gun to shoot down low-flying aerial targets, including planes and helicopters. To defend against incoming anti-tank missiles, the T-14 will have a 12.5 mm turret-mounted heavy machine gun, RT said.

The Armata is literally a one tank army. The T-14 can defend itself from pretty much anything. Even the most modern Apache helicopter would not have a 100 percent chance of destroying the tank with its missiles, the US Foreign Military Studies Office (FSMO) said.

The Armata tank is set to undergo state trials in 2016, Uralvagonzavod is expected to supply over 2,300 of the new tanks to the Russian military by 2020. The Armata tanks will replace the older T-72 and T-90 tanks.