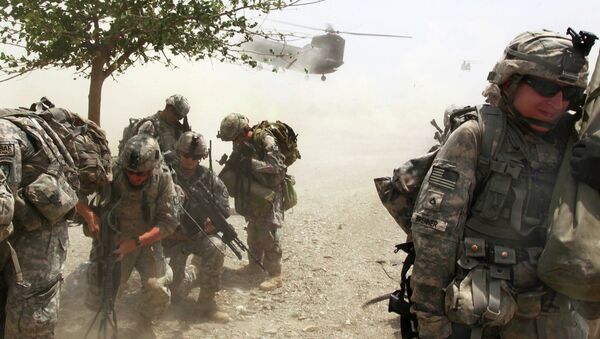 © Flickr / The US Army
Subscribe
Although US President Obama vowed that "a decade of war is now ending" in 2013, the US troops have got bogged down in three conflict zones, while Washington takes regular lethal actions in at least five countries, Michael Crowley noted.

President Obama's "dream" of extricating the United States out of foreign conflicts has been crushed by reality, noted Michael Crowley, an American expert in foreign affairs and national security.

"The US takes regular lethal action in at least five countries. US troops are deployed in three conflict zones. And America is directly involved in a pair of Arab civil wars," the expert underscored.

Deadly Accuracy: Only 1 in 8 Americans Killed by Drones Was Targeted
It remains unclear "how much more military risk America should take on as global conflicts multiply," Mr. Crowley noted. Furthermore, things could get even worse, he added, referring to the ongoing Ukrainian crisis and the threat posed by ISIL in the Middle East.

Meanwhile, the US has found itself in the midst of the Yemeni conflict. Obama has provided Saudi Arabia with logistical and intelligence assistance and announced his decision to send warships off Yemen's coast, turning a deaf ear to warnings that such moves may spark tensions between the United States and Iran.

At the same time, the accidental killing of two innocent captives including one American national near the border of Afghanistan and Pakistan, has once again demonstrated that the war on terror against al-Qaeda in Central and Southern Asia still remains unresolved, the expert stressed.

So far, President Obama has not only slowed the withdrawal of American military servicemen from Afghanistan, but expanded their authority to carry out combat operations in the region, he noted.

"We're sort of seeing the world order cracking around the edges. The only thing Obama can hope is that it doesn’t completely collapse while he's still president," said Robert Kagan, a conservative author and historian, as quoted by Michael Crowley.

Muddying the Waters: US Interested in Keeping Up Ukrainian Crisis
However, it seems that the prospect of further conflict escalation in Ukraine does not frighten Washington policy-makers. State Department officials are urging the US President to provide Kiev with lethal arms, citing security issues. According to US policy makers, Russia is beefing up its military presence in Ukraine. (However, they have not yet presented any credible evidence to prove their assumptions.)

Mr. Crowley cited Derek Chollet, former Special Assistant to the President and Senior Director for Strategic Planning on the National Security Council Staff, who said that Obama has never been "under the illusion that we're going to return to a peacetime state where problems are far away and we don't have to be engaged abroad."

However, it seems that Obama's strategy to avoid "getting sucked into one particular theater" and to maintain a "strategic agility" around the world is only multiplying America's dangerous entanglements.