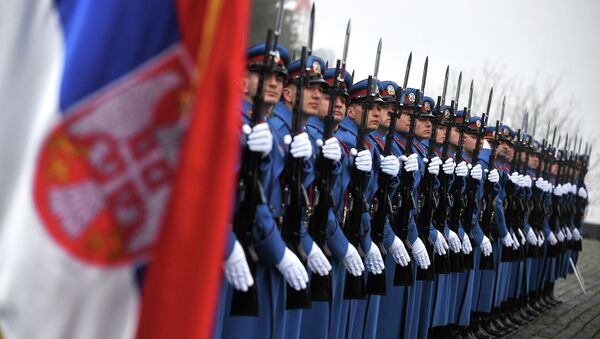 The Serbian guard officers, who had never participated in military parades abroad in nation's modern history, were sent off from Batajnica military airbase some 20 kilometers (12 miles) northwest of Belgrade.

Chief of the General Staff of the Serbian Armed Forces Gen. Ljubisa Dikovic and Russian Ambassador to Serbia Alexander Chepurin were present at the ceremony.

"The Serbian delegation headed by the president will also be present at the [Victory Day] parade. We appreciate it and realize that Serbia puts its best foot forward," Russian Ambassador to Serbia Alexander Chepurin told reporters.

Russia
Over 700 Foreign Servicemen to Take Part in Moscow Victory Day Parade
The upcoming Moscow parade commemorating the 70th anniversary of the Soviet victory over Nazi Germany will be the largest one in Russia's modern history.

Some 16,000 troops from the Russian Armed Forces will take part in the ceremony along with ten foreign parade teams with a total number of 732 people, according to Russian military officials.

Leaders of at least 25 countries, including Serbia's President Tomislav Nikolic, will attend the parade.