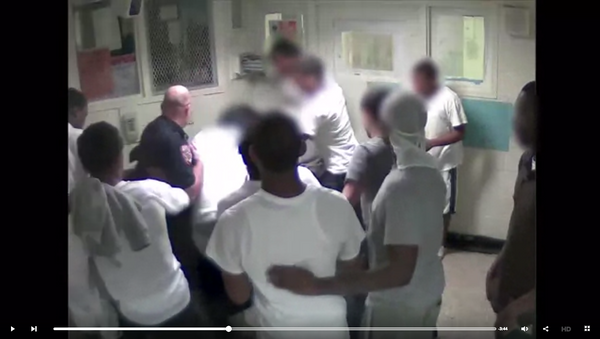 Security video obtained by The New Yorker from Rikers Island jail in New York City shows the abuse endured by a teenage inmate at the hands of a guard and fellow inmates.

The video made public this week involves Kalief Browder, whom was arrested in May 2010 after allegedly stealing a backpack. Browder, who was a 16-year-old High School student at the time, spent three years behind bars as he awaited trial. The courts subsequently dismissed his case before it was eventually dismissed in May 2013.

The video shows a guard approaching Browder’s cell to escort him to the shower on Sep. 23, 2012. Browder can be seen putting his hands through a slot in the cell door to be handcuffed. The guard then leads Browder out of the cell and down the tier. Browder can be seen saying something to the guard, who then slams Browder to the ground and drives his face against the floor.

A captain arrives and the guard tells him that Browder was trying to run, according to Browder.

“I was on the floor going crazy,” Browder said after watching the video.

He recalls yelling, “He’s lying. I didn’t do nothing.”

According to a Department of Correction report, Browder was “involved in a use of force” with “D.O.C. staff” that day.

The incident left Browder with a contusion on his face. A medical report produced after Browder’s subsequent visit to the clinic indicated his injuries were sustained either after an “attack by staff” or after “slamming his face into the shower wall” – a scenario Browder denies.

Browder says the penalty for this incident was more time in Rikers’s Central Punitive Segregation Unit, where the incident took place. The unit, which Browder spent nine months in, is also known as the Bing.

Before someone spends extra time in the Bing, the inmate usually has to go through an administrative hearing – something Browder denies being a part of.

“If I would’ve went to Bing court, I would’ve told them to look at the camera, and they would’ve seen I didn’t do anything,” Browder said. “After that happened, to be honest, I was scared to come out of my cell to get in the shower again, because I felt, if I come out of my cell and he slams me again, then I’m going to get more box days.”

Browder spent a total of two years in solitary confinement.

During fall 2010, Browder was assigned to a housing unit run by a gang. On Oct. 20, 2010, a fellow inmate spat on Browder. Later that night, Browder retaliated by punching the other inmate resulting in a brawl in which at least ten other inmates punched and kicked Browder.

This incident was caught by four surveillance cameras.