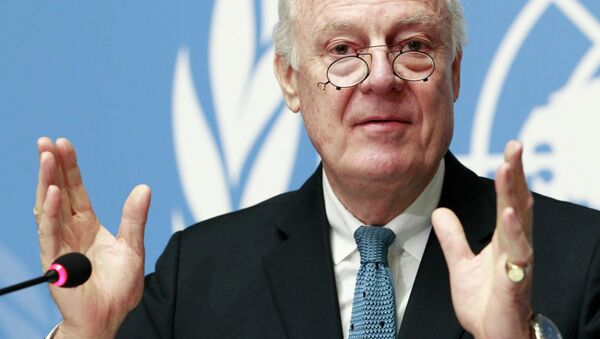 "The UN Security Council members heard a briefing from Special Envoy Staffan de Mistura on his effort to facilitate reaching a political solution for conflict in Syria," Kawar said.

New Round of Syrian Talks to Take Place in May – Opposition
De Mistura wants refocus negotiation on Syria, narrowing gaps toward a political solution based on the Geneva communique, she added.

"The envoy mentioned what he will do next month in Geneva, holding separate meetings with the Syrian parties, representatives of the civil society and regional and international actors. He will provide his assessment to the Secretary General and keep the Security Council informed," Kawar noted.

Later on Friday, de Mistura told journalists he will report to the UN Secretary General on his progress by the end of June.

"This is not Geneva Three, this is a series of consultation, one to one," he said commenting on the upcoming sessions.

Syria has been in a state of civil war for the past four years, with government forces engaged against various militias. Syria's warring parties have met twice over the last three years at UN-backed Geneva conferences but failed to reach a practical solution toward ending the violence.