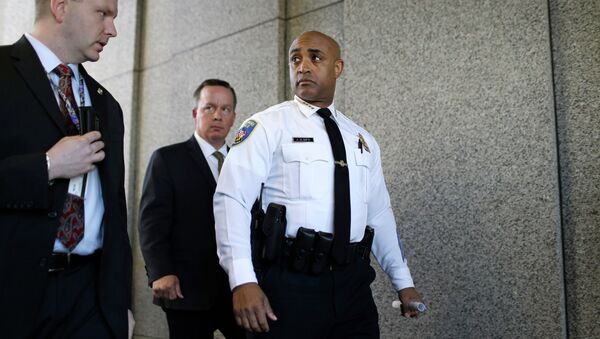 © AP Photo / Patrick Semansky
Subscribe
International
India
Africa
Baltimore Police Commissioner Anthony Batts stressed at a news conference Friday that the investigation into Freddie Gray’s death is still ongoing. He did, however, acknowledge that Gray asked for medical attention, should have received medical attention, but did not.

Deputy Commissioner Kevin Davis gave a detailed account of the route taken by the transport wagon containing Freddie Gray after he was arrested. Three critical stops were made.

During the first stop, the police investigation revealed that Gray was taken out of the van and had iron braces attached to his legs. At this time, he was able to stand and able to talk. During the second stop, police had to “deal with” Gray, though the details of that exchange are still under investigation. He was, according to Davis, still able to stand and communicate.

The third stop occurred after the transport wagon responded to a separate crime in the area. A second prisoner was placed inside the van, and it was at this time that Gray directly asked officers for medical assistance which was then refused.

Commissioners admitted that was wrong, and said that the investigation is ongoing.

Batts also reiterated admissions from previous days, in which the investigation found that Gray had not been buckled inside the vehicle, as police regulations require. Batts said there were "no excuses for that. Period."

Authorities also said they would be releasing any Baltimore CCTV footage which may have recorded the scene of Gray’s arrest.

The April 12 arrest of Freddie Gray was captured on on cellphone video by a bystander. The six officers involved have been suspended after the unarmed Gray suffered spinal cord injuries and died a week later in a local hospital.

The death of yet another black man at the hands of police has reinvigorated outrage over questions of police brutality across the country. The death of unarmed black teen, Michael Brown, at the hands of a white police officer, launched a number of protests nationwide, as did the similar deaths of Eric Garner, Tamir Rice, and others.

Gray’s death has already sparked mass protests in Baltimore, with major demonstrations planned for the weekend. Two people were arrested at demonstrations on Thursday, and state troopers have been sent to the city in anticipation of unrest.

"I cannot begin to understand the level of heartbreak and pain felt by the family of Mr. Freddie Gray," Maryland Governor Larry Hogan said in a statement. "It is my hope that events planned for this weekend continue to reflect positively on the community."

During the news conference, Batts stressed that all previous demonstrations have remained largely peaceful and respectful.

"Some characterize protesters as wanting confrontation or wanting a fight," Batts said. "We know that this isn’t true."