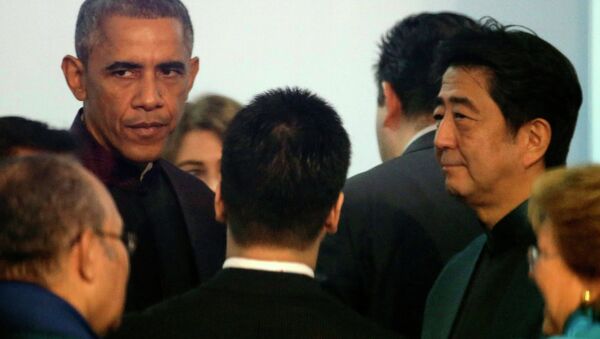 “We do hope the leaders will be able to have a constructive conversation that reflects the substantial progress that has been made in negotiations, which has narrowed the important differences that there were between the United States and Japan [on TPP],” Deputy National Security Advisor for International Economics Caroline Atkinson told journalists.

The White House is not expected to make any formal announcements regarding the TPP agreement during Abe’s visit because the United State and Japan still have work to do, especially on issues related to tariffs on automobiles and agricultural products, Atkinson added.

Abe and Obama will discuss a range of topics in addition to the TPP agreement, including climate change, global health and regional security, according to the White House.

US, Japan to Announce Historic Changes to Alliance on Monday
On Friday, the White House announced that US Secretary of State John Kerry and Secretary of Defense Aston Carter will meet with their Japanese counterparts in New York City on Monday, where they will reveal a transformation in US-Japan relations.

Carter and Abe met in Tokyo on April 9, 2015, and discussed opportunities for the United States and Japan to cooperate on security issues, including pandemic crisis response and humanitarian aid.

On April 6, 2015, the US Defense Department announced it would locate 60 percent of its military fleet to the Pacific-Indian Ocean, with the newest and most capable weapons systems first going to the Asia-Pacific region.