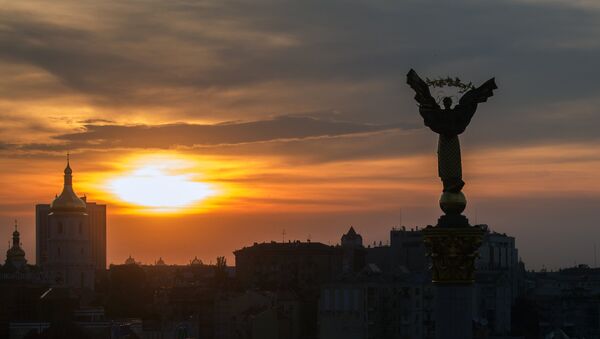 © Sputnik / Vitaly Belousov
/
Go to the photo bank
Subscribe
The Russian language is unlikely to become the second state language in Ukraine due to reluctance from Kiev, Yury Boyko, the leader of Ukrainian parliamentary faction Opposition Bloc, said.

"It is About Survival": Ukraine Must Fix Economy – Opposition Leader
KIEV (Sputnik) — Ukrainian authorities have established a constitutional commission to develop proposed changes to the fundamental law of the country. Ukraine's parliament plans to adopt a law on the decentralization of public administration by July 15.

"I think that in the current situation — no. The ruling authorities exert great resistance," Boyko told RIA Novosti, responding to a question about the prospects for the Russian language to be granted official status in a new Ukrainian constitution.

Constitutional reform in Ukraine with focus on decentralizing power is part of the 13-point Minsk Deal, finalized in mid-February by the leaders of Russia, Ukraine, Germany and France in Minsk, the capital of Belarus. According to the Minsk deal, the reforms are to be implemented by the end of 2015.

Ukrainian Opposition Leader Accuses Kiev of Sabotaging Minsk Peace Deal
The legislation to be adopted was meant to protect the rights of the people of Donetsk and Lugansk – for instance, their right of language self-determination.

However, on April 6, when the Ukrainian constitutional commission first convened, the country's president, Petro Poroshenko, said that Ukrainian will remain the only state language in Ukraine.

According to the Ukrainian Census, 29.6 percent of Ukrainians considered Russian to be their native language. This was especially true for Ukraine's eastern regions of Donetsk and Lugansk, where some 70 percent of local residents indicated the same.