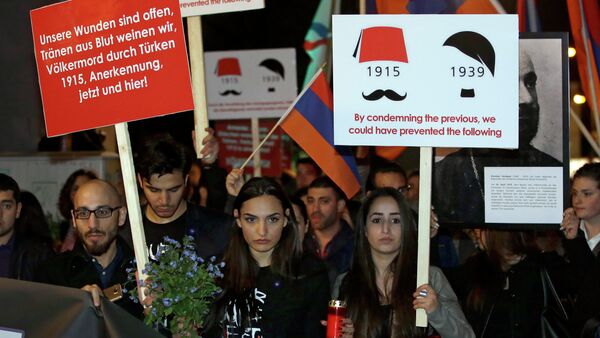 BERLIN (Sputnik) — German President Joachim Gauck used the term "genocide" referring on Thursday to the events of 1915 when thousands of Armenians were massacred under the Ottoman Empire's oppression.

The statement was made after an ecumenical church service held on Thursday at the Berlin Cathedral and comes ahead of the centennial commemoration of the Armenian Genocide in the Ottoman Empire, scheduled for April 24 in Yerevan.

"In this case, we Germans have to take measures in regard to this atrocities, since the issue is about our joint responsibility under certain circumstances — it is our joint fault of genocide against the Armenians. We can not get rid of the guilt as long as we deny it, suppress or minimize," Gauck said.

On April 24, the German government is to consider a joint statement on the issue of the Armenians genocide recognition. German Foreign Minister Frank-Walter Steinmeier will also take part in discussion, who earlier said in an interview with Sueddeutsche Zeitung newspaper, that he understands "the feelings and grounds on which some would like to call these crimes as genocide."

However, Steinmeier's comments come in contrary with the official position of the German Foreign Ministry. Earlier Steinmeier said live on local ARD channel, that he would prefer to avoid "forceful wording" in relation to the events of 1915 as Berlin is interested in further dialogue with Ankara.

Earlier this week, Austria’s parliament issued a declaration, calling the mass killings of Armenians by the Ottoman government during the World War I a “genocide.”

High-ranking officials from around the world are expected to join the commemoration in Yerevan to pay tribute to the victims. Main funeral ceremonies are scheduled on April 24, 2015.

Up to 1.5 million Armenians were massacred under the Ottoman Empire's oppression, according to Yerevan estimates. Yerevan insists on an international recognition of the Armenian Genocide in the Ottoman Empire, while Ankara refuses to name the massacre a genocide, stating that Turkish nationals were also among victims.

Some 24 countries have recognized the Armenian genocide so far, including Russia.

In the early twentieth century Ottoman Empire and Germany were allied partners.