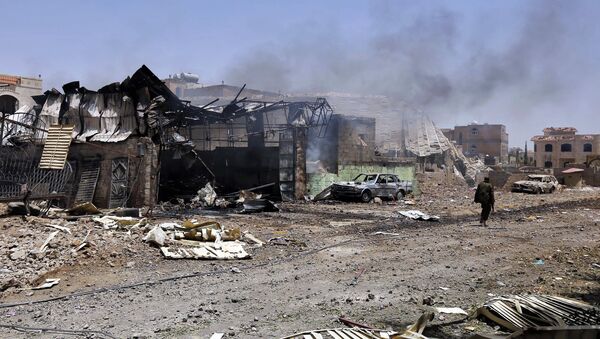 © Sputnik / Stringer
/
Go to the photo bank
Subscribe
At least 1,080 people were killed and 4,352 were injured since the escalation of Yemen crisis in March, according to the statistical report of the World Health Organization covering the period between March 19 and April 20.

Military Campaign Against Houthis in Yemen Continues
GENEVA (Sputnik) — At least 1,080 people have been killed and 4,352 have been injured since the escalation of Yemen crisis in March, the World Health Organization said in a statistical report on Thursday.

The statistical data compiled by the WHO is based on reports from health facilities in the crisis-hit country, covering the period between March 19 and April 20.

As a result of the hostilities, 48 children died and 143 more were injured.

The highest number of casualties have been registered in the Aden governorate in southern Yemen (191 killed and 1,237 injured) and in the capital city of Sanaa (209 killed and 934 injured).

New Saudi-Led Bombings Kill Dozens in Southern Yemen
Both the Yemeni capital as well as the southern port city were heavily bombed by the Saudi-led international coalition since March 26 until Tuesday, when coalition declared an end to the air campaign against Houthi rebels.

Yemen has been in a state of turmoil for months, since the Houthis took control of large areas across the country, including the capital Sanaa, forcing President Abd Rabbuh Mansur Hadi and his government to resign.

On Wednesday, the coalition started the next stage of its military campaign dubbed “Restoring Hope,” which will focus on counter-terrorism operations, humanitarian missions, and the revival of political dialogue in the crisis-hit country.