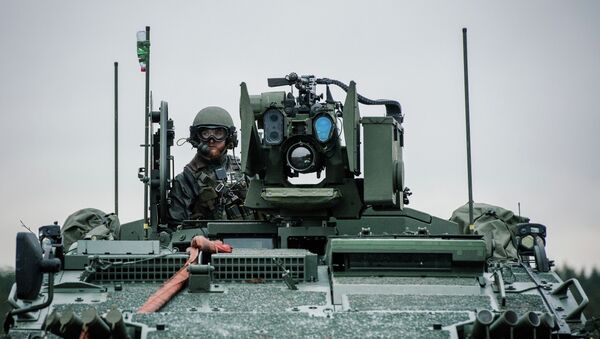 © AFP 2021 / JONATHAN NACKSTRAND
Subscribe
Member of Swedish parliament Jonas Gunnarsson said that Sweden should not become a member of NATO, because being free of military alliances is an important part of the country's defense policy.

Neutral Sweden Unlikely to Join NATO in Near Future
STRASBOURG (Sputnik) – Sweden should not become a member of NATO, because being free of military alliances is an important part of the country's defense policy, member of Swedish parliament Jonas Gunnarsson told Sputnik Thursday.

Earlier this week, Swedish Moderate Party member Olof Lavesson told Sputnik that the country could join NATO in the near future in light of growing pro-NATO sentiment in Sweden.

"As for me and my party, I'm not in favor of Sweden becoming part of NATO for many different reasons, but what we have done at the moment is try to find a cross-party agreement on defense,” Gunnarsson said.

Gunnarsson added, however, that Sweden and NATO have a history of good partnership. The politician also expressed concern over the crisis in Ukraine, in close proximity to Sweden, adding that recent developments triggered Sweden's, and the other Nordic countries', reaction to the potential threat.

The most significant expansion of NATO happened after the end of the Cold War. Ten countries joined NATO during two rounds of expansion: Hungary, Poland, Czech Republic — in 1999; Bulgaria, Latvia, Lithuania, Romania, Slovakia, Slovenia, Estonia — in 2004. Croatia and Albania entered the alliance in 2009.